Last night myself, The Car Spotter, like many of yourselves watched the latest Top Gear Series 22 Episode 1 in glorious BBC2 high definition.

Today, I thought I would share with you my thoughts and feelings on the episode.

Towards the beginning of the program, Jeremy Clarkson outlined this would be the first of 10 episodes of the new series. Great that this series is set to be a lengthier affair than the last couple which have been very short-lived.

The main focus of the episode was a race across St Petersburg by each of the presenters Richard Hammond, James May, Jeremy Clarkson and the test driver The Stig.

James May was driving a very small £7,000 Renault city car, Richard Hammond was riding a £9,000 850g carbon fibre bicycle and Jeremy Clarkson was in a full sized hovercraft. The Stig would be using public transport (trams, buses, walking and the metro).

The start of the race, four different transport methods

The hovercraft driven by Clarkson seemed extremely difficult to steer with precision, Hammond fell off his bike half-way into the journey after riding into tram lines. The Stig seemed lost on public transport although made steady progress throughout the race. Jeremy eventually figured out how to consistently drive the hovercraft on the waterways of St Petersburg. 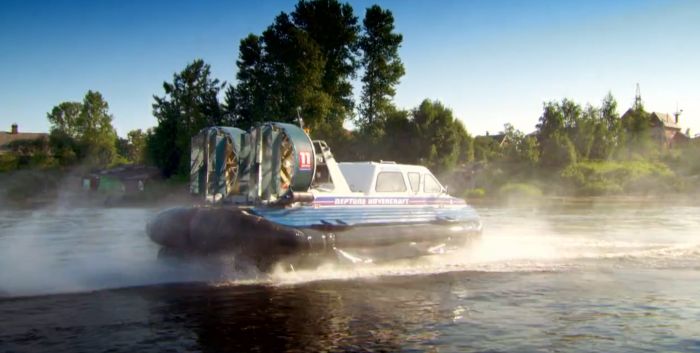 Jeremy Clarkson in the hovercraft

The entire process was highly amusing and entertaining to watch. With Hammond taking a major setback and switching bikes, it became a three horse race.

The feature then changed to the news where a few supercars were discussed in pretty poor detail including the new Ford GT, which you can read more about here. Jeremy Clarkson went off on a tangent about how his last one always had alarm problems and difficulties but never really discussed any of the new features of the latest new Ford GT, including the new V6 engine. The reviews are not particularly informative, technical or detailed in terms of the cars in question.

Half way into the program, Richard Hammond test drives the new Lamborghini Huracan. The review was pretty solid to begin with, explaining the Huracan to be the Gallardo’s successor and a few technical specifications and the three different modes that can be engaged in the Lamborghini Huracan. The Verde Mantis (fluorescent green) Lamborghini was shown drifting in slow motion and cornering very quickly.

Towards the end of the review disappointingly for myself, the review went off on a tangent and the car was described as not a proper Lamborghini and a small discussion on how Lamborghini’s shouldn’t be made to be sold as that is “idiotic”, but made to be extravagant. Myself and most other people would see the Lamborghini as a pretty extreme car with it’s outrageous styling, brash colour choices and mental performance figures. Clarkson later mentioned about how the car requires rockets coming out of the exhausts and Hammond adds it would be preferable to be slower with knives sticking out of the wheels. Pointless additions in my eyes that don’t really represent the cars.

Despite the unrelated comments, the Huracan was 4th on the Top Gear power lap time board, just behind an Ariel Atom V8 and beat the more expensive and larger Lamborghini Aventador, more comparisons with the Aventador would made a better review in my opinion. Of course, the idiotic comments and behaviour allow an easy and humorous watch for the viewers.

To watch the first reported Lamborghini Huracan written off at 200mph, click here.

To see a more detailed review of the Lamborghini Huracan I saw in South Kensington, click here.

After this review, the star in the reasonably priced car was songwriter and musician Ed Sheeran. He drove an automatic car due to the fact he had never driven before and a few bloopers of him driving were shown. Driving an automatic isn’t too different to driving a go-kart with only the brake and accelerator pedals to navigate so not too difficult in theory. He found himself second bottom in terms of lap times, slightly faster than the comedian Jack Whitehall who also couldn’t drive. 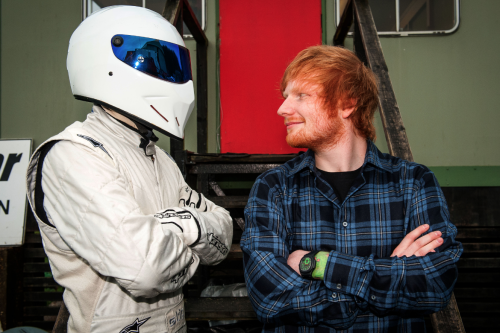 Ed Sheeran, the star in the reasonably priced car and The Stig

The episode then went back to the St Petersburg race. Clarkson seemed to arrive at the palace first in the hovercraft, narrowly beating Hammond who was moments behind. This is surprising considering Hammond fell off his bike, presumable had to be treated at the scene, persuade a local to hand over a bike, set himself up on the new bike and mount the cameras and then make up a large amount of time. I often wonder how much the editing affects the show. They were both interrupted by James May however, who was lurking in the background after arriving first, so the car proved the most successful in the St Petersburg traffic.

The Stig was then shown elsewhere banging his head against railings next to a white Porsche Carrera S, Again I wonder how much editing was done because at the last check, ,The Stig was way out in front using public transport with only a short distance remaining. It makes me think that perhaps public transport was the true winner.

Top Gear is always a humour, enjoyable and easy watch but often it lacks depth and details of the cars. The program seems more about idiocy and theatrics rather than about the automobiles however it is still enjoyable.  Regardless, I will be watching next week, will you?