Recently I, The Car Spotter, was invited by Mercedes-Benz to undertake a tour of Mercedes-Benz World at Brooklands race circuit in Weybridge, Surrey.

Today The Car Spotter will be talking you through my tour and thoughts of the Mercedes-Benz World complex.

On first arrival at the facility of Mercedes-Benz World just after midday, I was welcomed into the staff car park where I was met by a whole host of Mercedes cars, ranging from A-class models and a huge number of C-Class and E-Class Coupe models through to C63 and E63 AMG models. These belonged to current employees. In addition to these cars was a couple of BMW M3s and a BMW M5. Also, a first sighting for myself, a Tesla Model S. 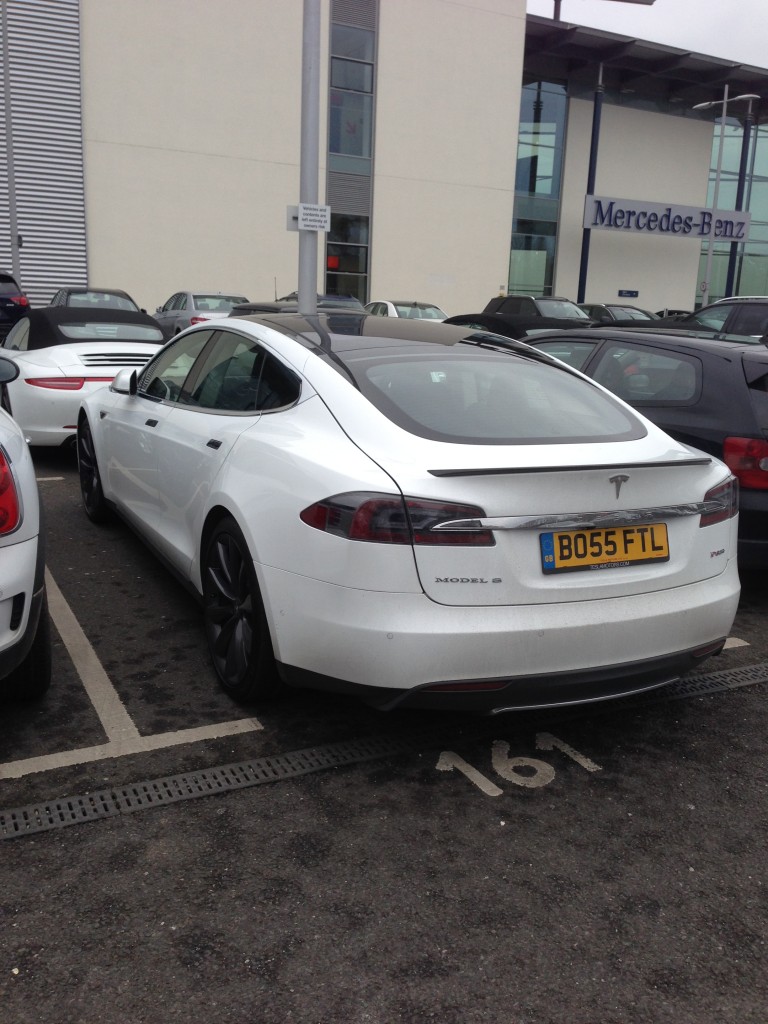 I left the car park and entered the large building. Immediately I was met with a sense of space and light. A huge escalator ran from the ground floor to the top floor. The two suspended floors created balcony viewing onto the ground floor and a large glass escalator was in front of me. Before meeting my tour guide I couldn’t help but stop and stare at the Mercedes CLK GTR that was present in front of me. The exhibition centre really was a car fan’s or  Mercedes enthusiast’s dream. 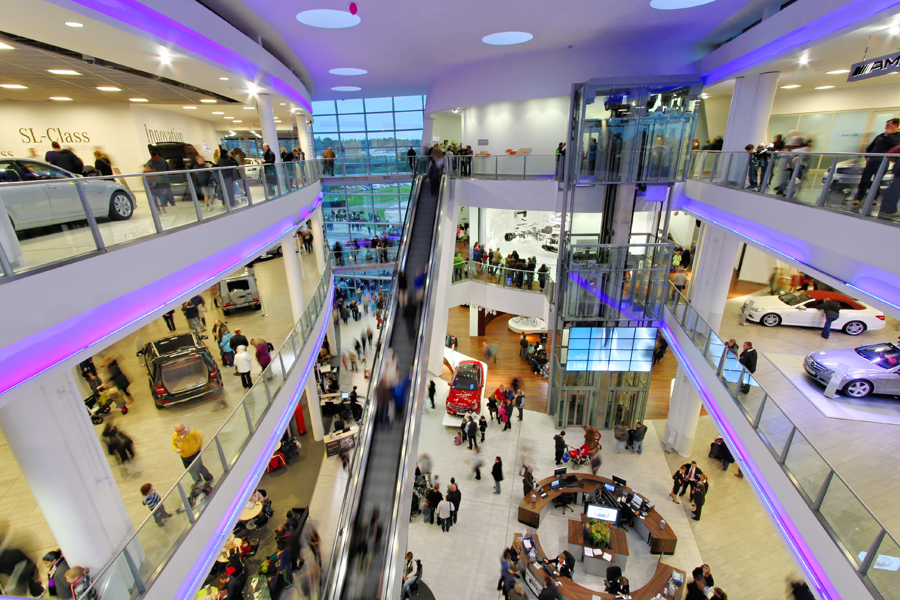 Mercedes Benz World when it was first opened, picture by Limelight Marketing

I met the guide, who started the tour with the history of Karl Benz and Gottlieb Daimler. A Benz Patent Motorwagen was the first vehicle to be seen. The 1886 model was the first ever car or moving vehicle, the total engine output was 0.75hp, so less than one horse. 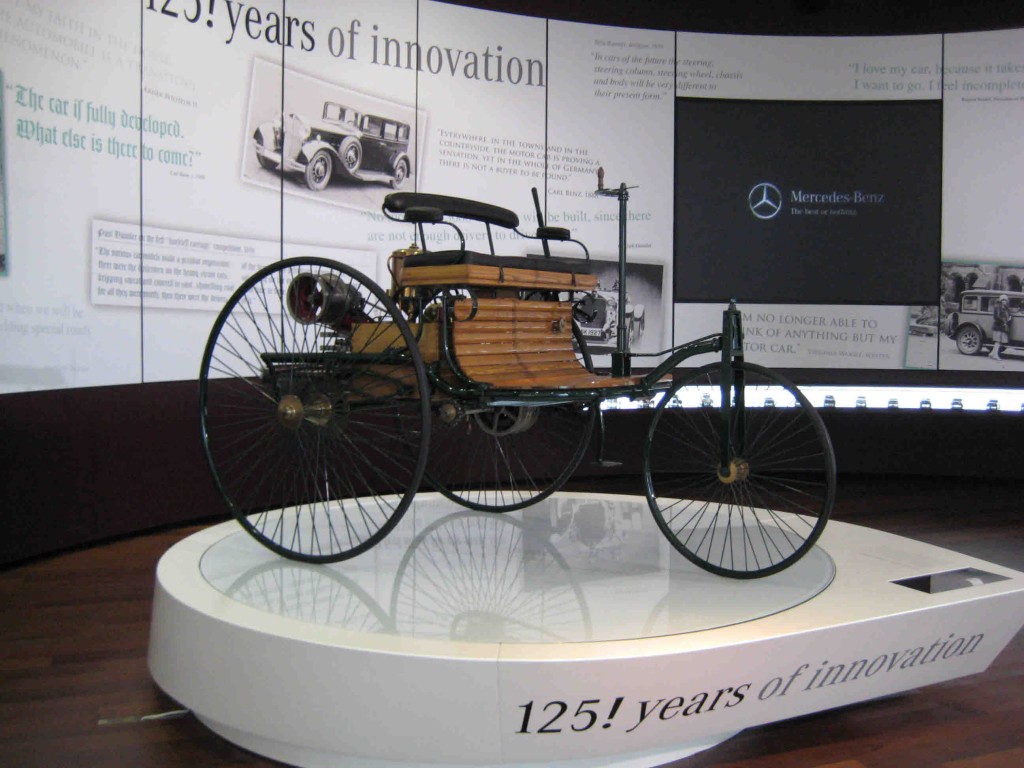 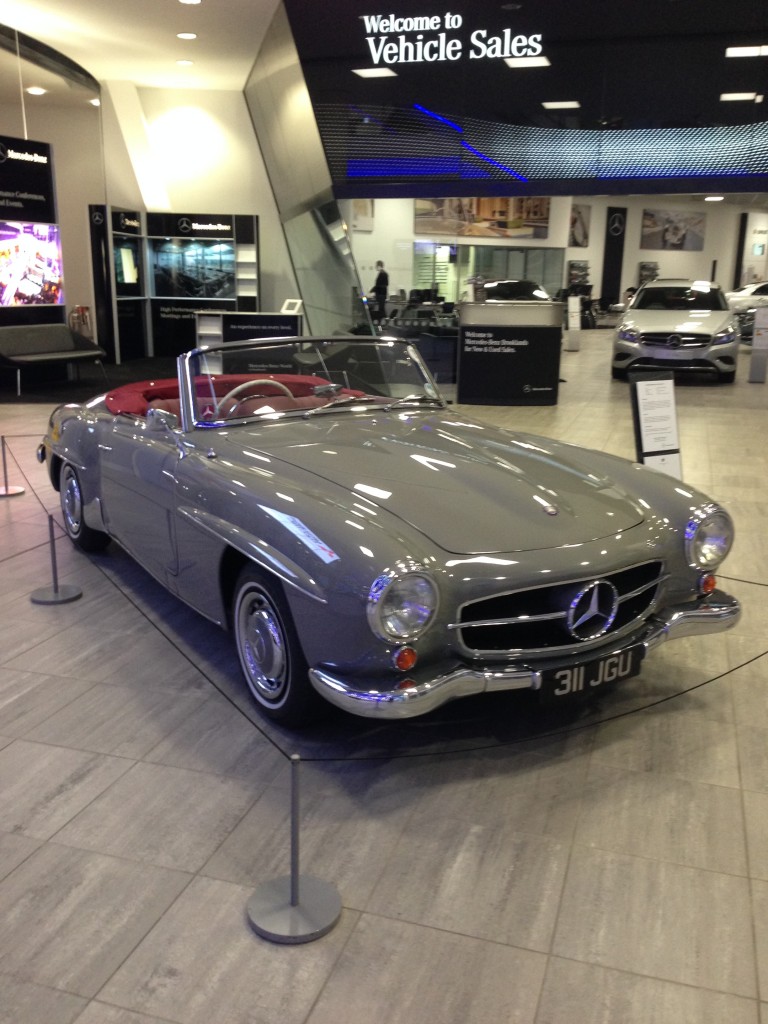 After viewing these cars, we moved onto the 1 of 1 RHD dark silver Mercedes CLK GTR with magenta interior. 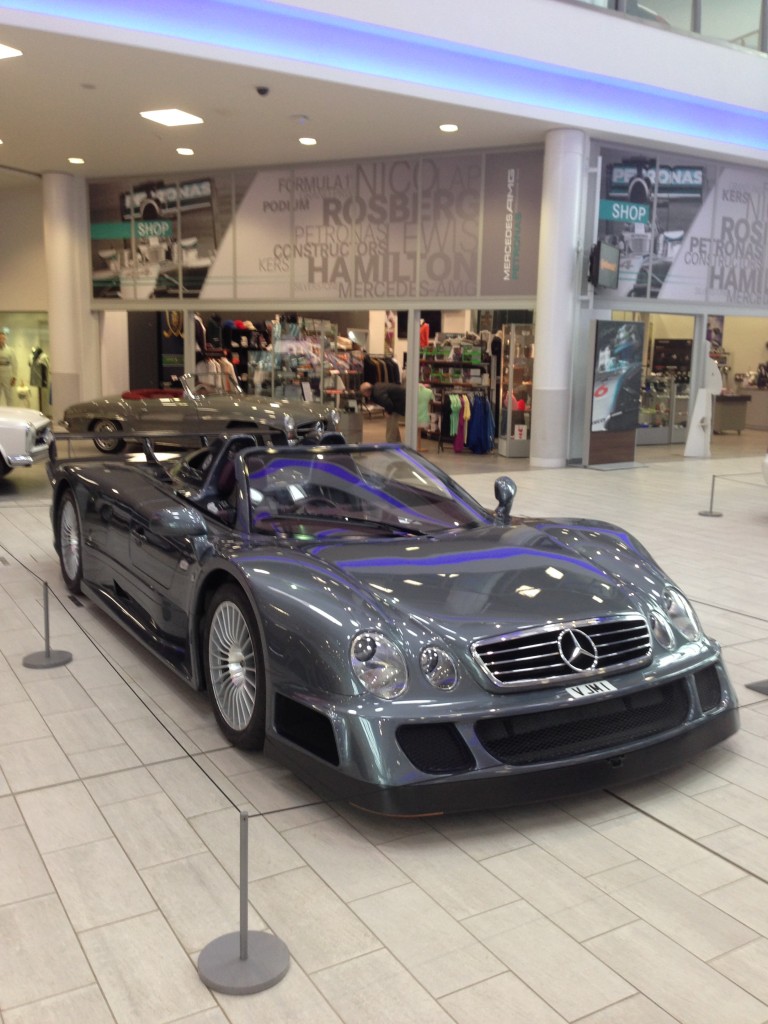 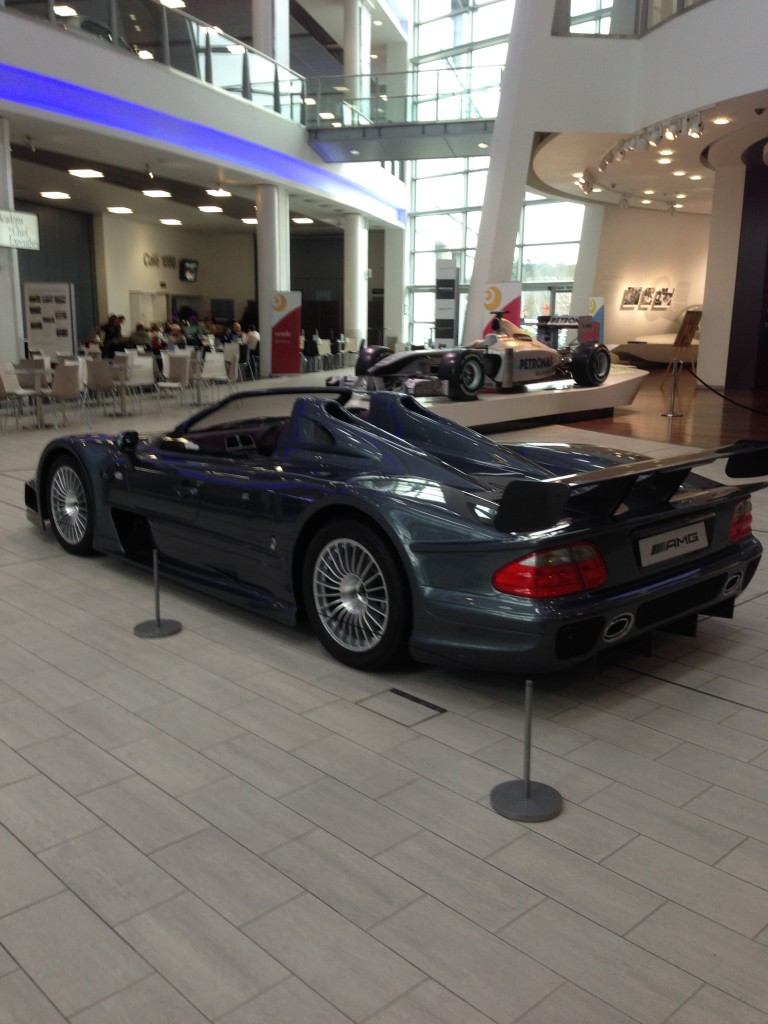 The tour guide stated that there were only 25 CLK GTRs produced in the late 1990s, all of these were left hand drive. In 2006, this particular car was produced for Hassanal Bolkiah, the Sultan of Brunei. He insisted he does not drive left hand drive cars and another would have to be made, with money being no object. The roadster was sold for £616,000 ($973,834) at an auction in 2009. The car had clocked only 34km to this day, all of this around the Sultan of Brunei’s complex and none of it on public roads. The driver’s seat had to be widened, because in the words of the tour guide, the Sultan of Brunei is a, ‘large gentleman’. The tour guide explained that the only features on the car that remained the same on both the CLK and the CLK GTR were the front grille and headlights. The car has no roof so if it rains, the interior will get wet. The current owner has never been to collect the CLK GTR from Mercedes-Benz World, instead he leaves it there to be viewed by the public, benefitting from the free storage, daily polishing and maintenance. The car was registered to be road legal a few summers back as the owner expressed interest at taking it to Europe for a car rally however the car was never collected.

Next, the tour ventured to the top floor where a brand new Mercedes S63 AMG Coupe was present. Read more about the Mercedes S-Class AMG Coupe here. The S-Class coupe is extremely luxurious, eloquent and features a lovely indulgent interior with many screens and lovely quilted leather. This particular example was finished in silver with a black leather interior. 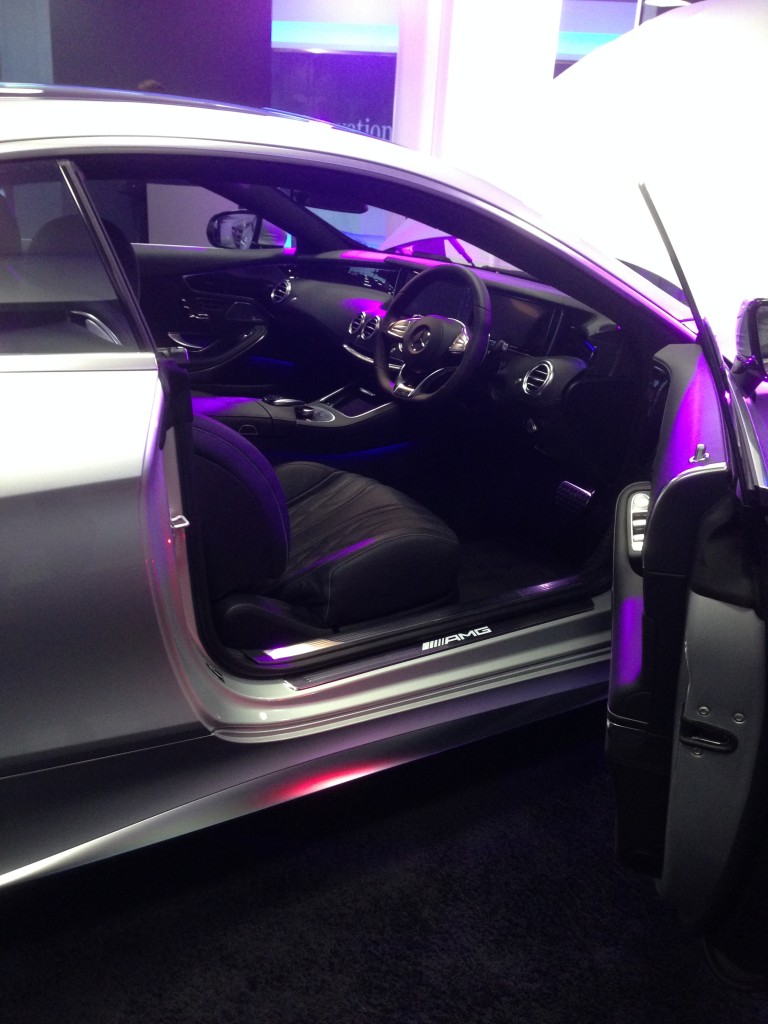 After this I was taken to the private balcony in the AMG lounge that overlooks the race course and skid pan. Here members of the public can purchase experiences in various Mercedes models. On the track at the time were E63 AMG models. The balcony provided panoramic views of the complex and parts of the old Brooklands motor circuit could be seen, in addition to the off road course owned by Mercedes Benz World that can be enjoyed by the public through purchasing experiences. 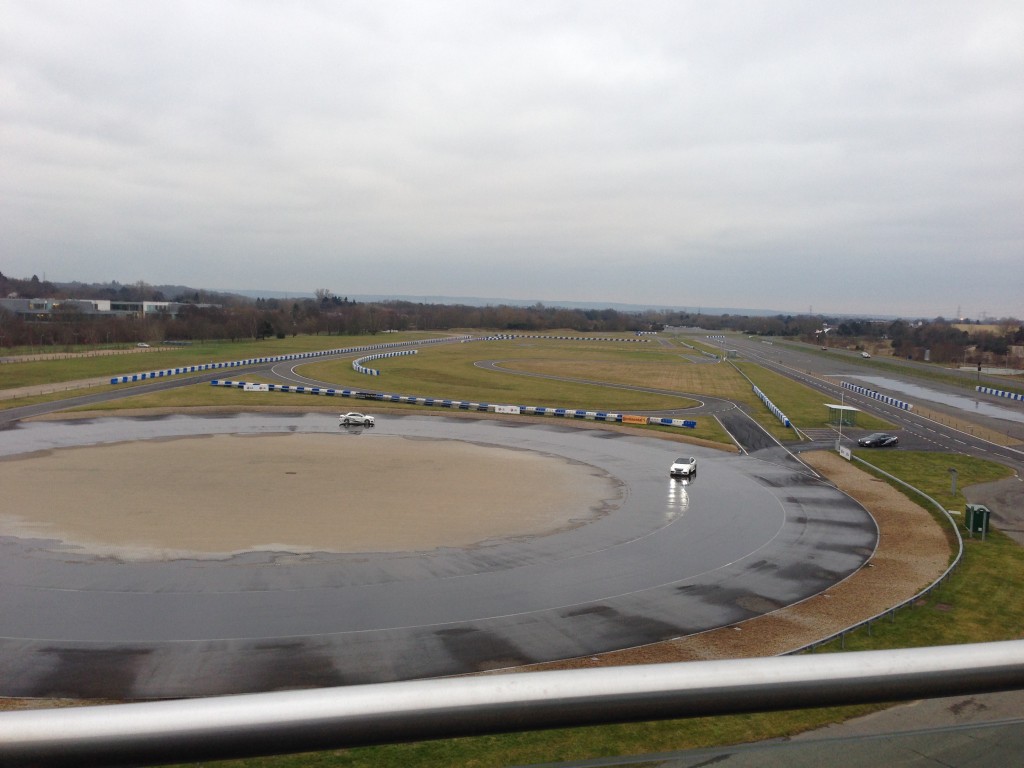 Upon entering the building, we went to view a very rare and special Mercedes-Benz concept car. This was the Mercedes-Benz F 200. The Mercedes-Benz F 200 was a concept at the 1996 Paris Motor Show. The goal was to demonstrate innovations in control, design and comfort. The car is similar to a CL-Class C215, however I was shocked when I was informed of the value of the one off Mercedes Benz F 200. The F-200 is worth £11 million! The 2 door coupe has some mental features including: a central joystick and sidesticks that can be switched between driver and passenger so either can drive, there is no steering wheel present in the F 200. The car features butterfly doors, electro-transparent panoramic roof glass where an electric current changes the transparent sunroof glass to opaque at the touch of a button. Video cameras instead of rear view mirrors and a 360 degree view of the outside from screens that run the full length of the dashboard. The F 200 also features the first voice recognition and control system. The tour guide informed me that a couple of years ago a chandelier had fallen onto the bonnet of the car and the panel had to be sent off to be re-sprayed as the colour is not stocked anywhere in the world, it has to be created from scratch. 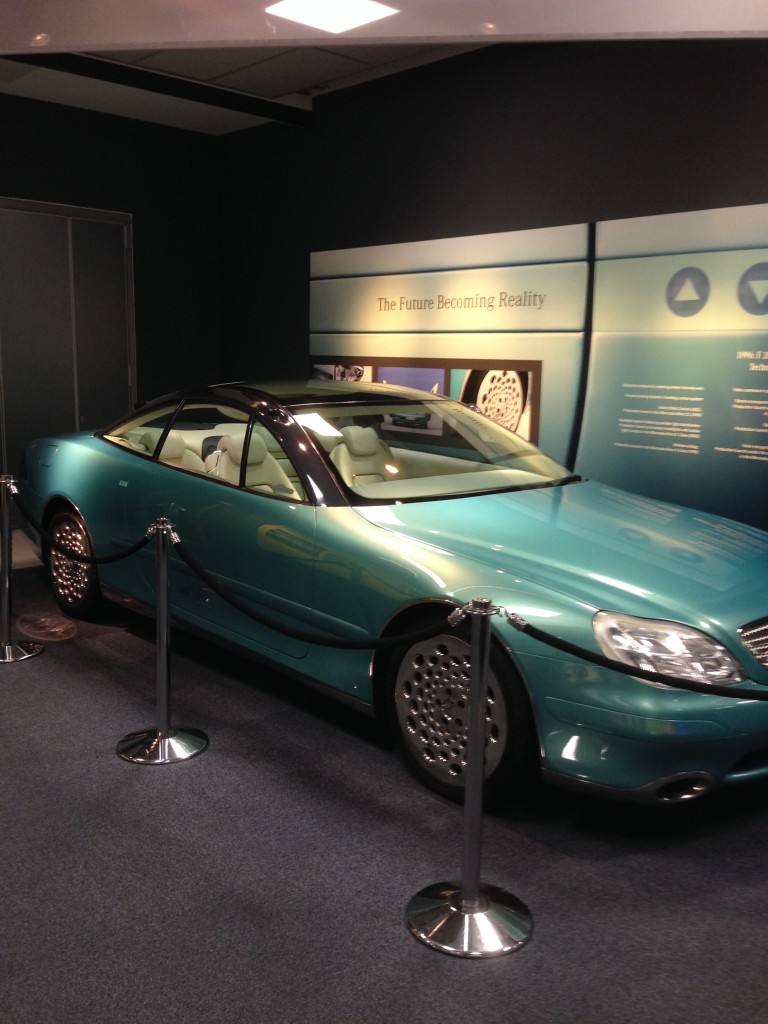 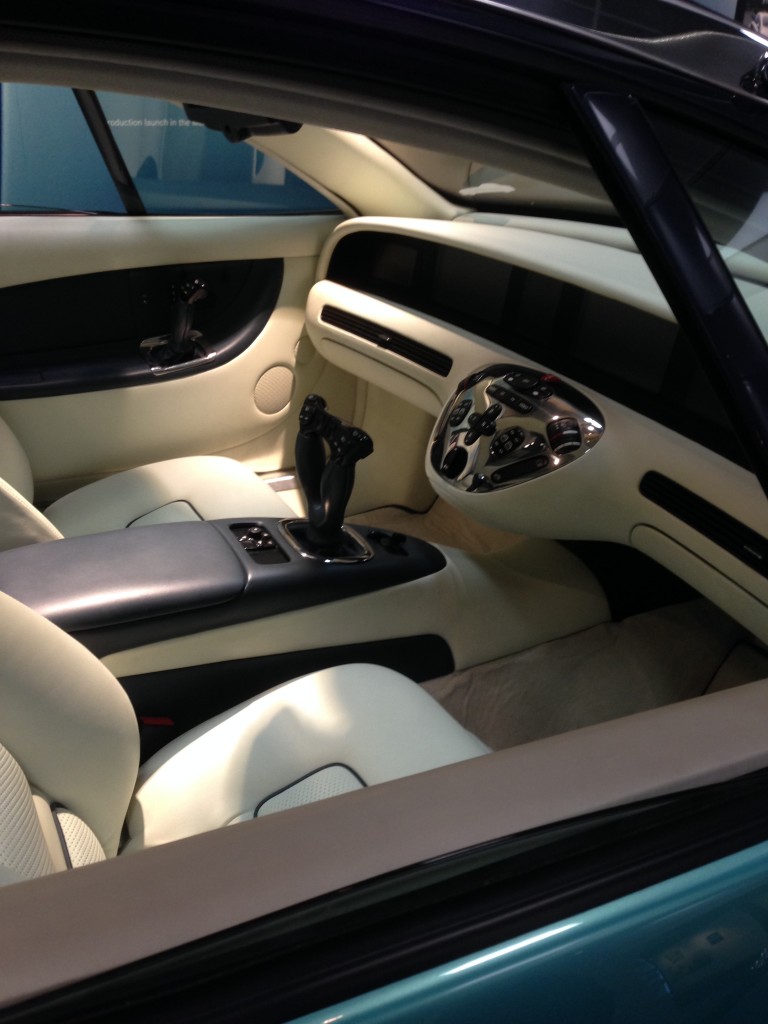 Interior of the Mercedes F 200

Next we dropped down to the middle floor of the exhibition centre, where an exploded 2007 McLaren Mercedes car can be seen. The piece contains 3,200 components, however the tour guide said this is only a fraction of the total components of the finished car. The exploded F1 car was certainly a piece of art. 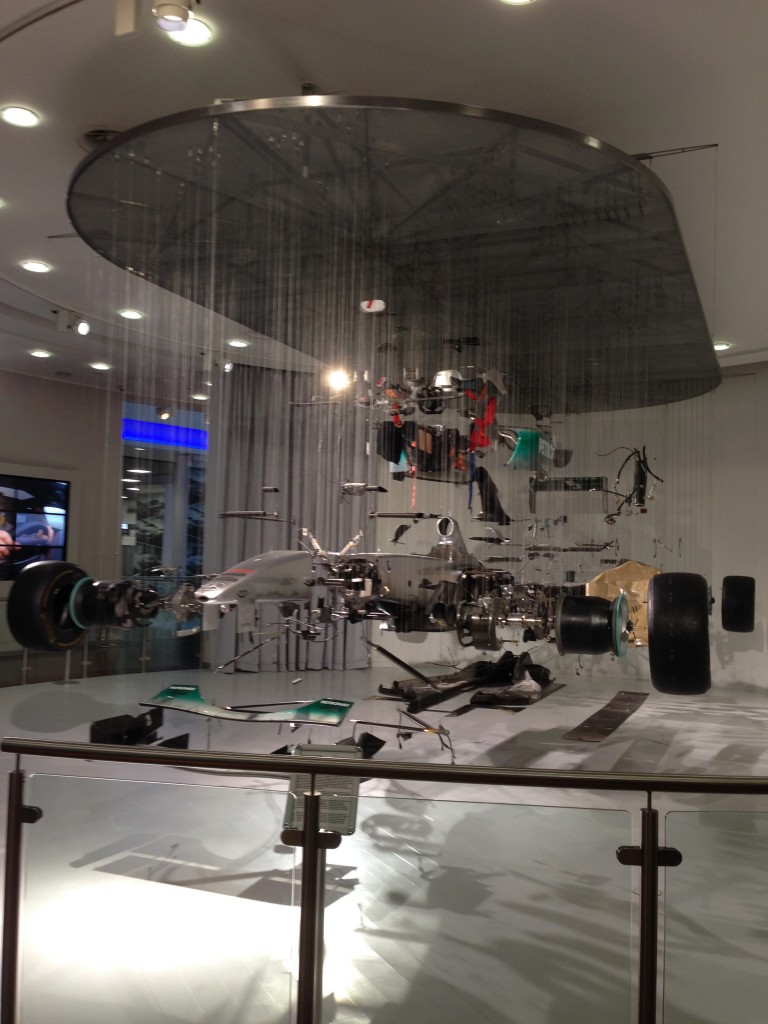 The final exhibit for the first day was an extremely iconic Mercedes. It was a 1955 Mercedes Benz 300SL Gullwing. This is probably one of my all time favourite cars. The 300 SL Gullwing was finished in silver with a red interior and matching luggage case. The tour guide stated that this particular 300SL was owned by Mercedes-Benz World and not by a private collector. This meant he popped the Gullwing door upwards and offered me the chance to sit inside the iconic classic car. Of course I didn’t need asking twice and I climbed over the exhibit rope and climbed into the vehicle. Climbing out was more difficult than the usual car, the Mercedes-Benz 300SL features extremely wide interior side skirts and climbing out of this whilst trying not to scuff the car is difficult to do in a dignified manner. Nonetheless, it was an incredible opportunity to sit inside an original Mercedes 300SL. The tour guide stated the car is regularly entered into the Mille Miglia event and will be doing so this year. 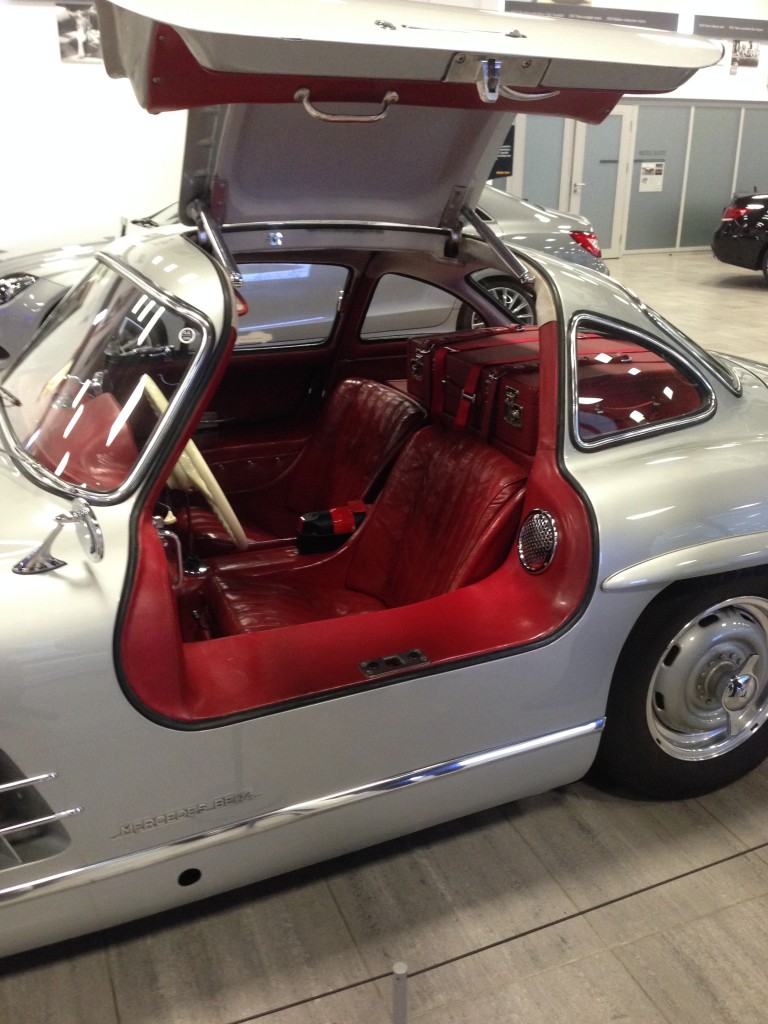 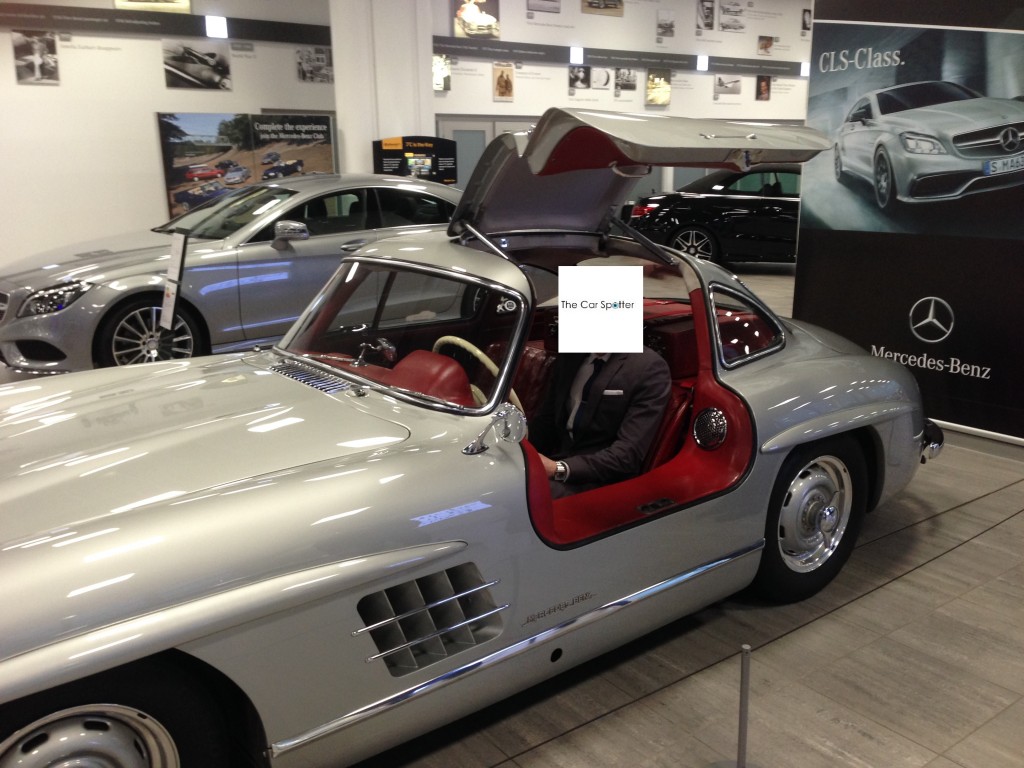 Myself, The Car Spotter inside the incredible Mercedes 300SL Gullwing 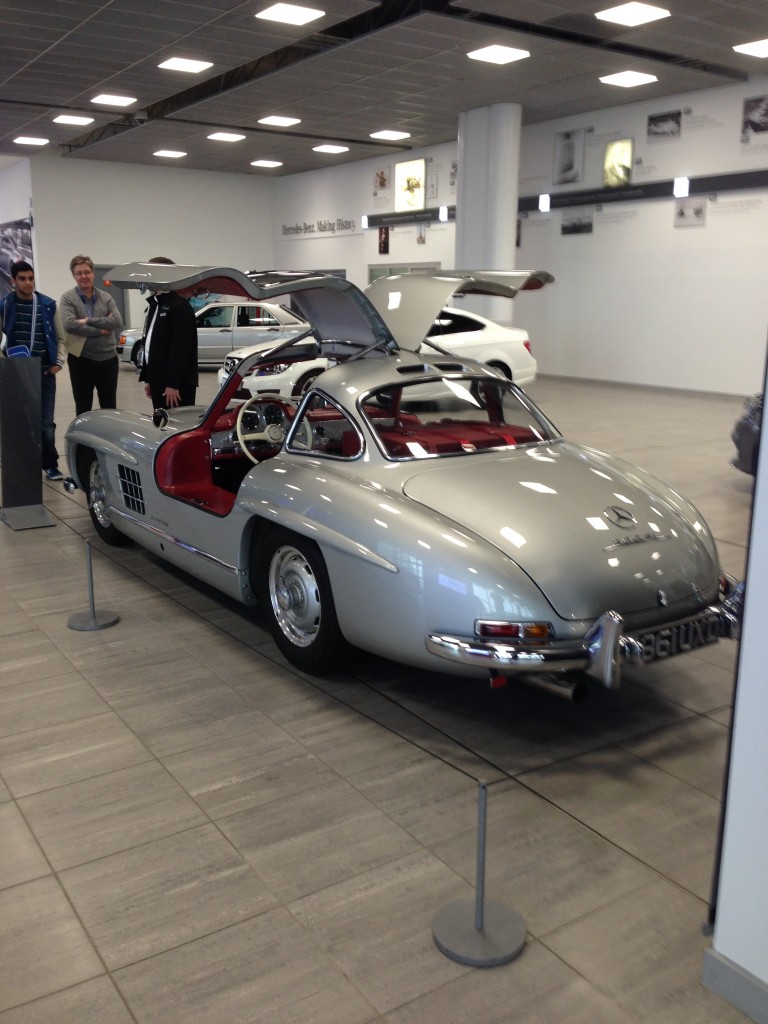 After this great tour on the first day, I was staying at the Brooklands Hotel, courtesy of Mercedes-Benz and would return the following day to look at more of the vehicles on display. 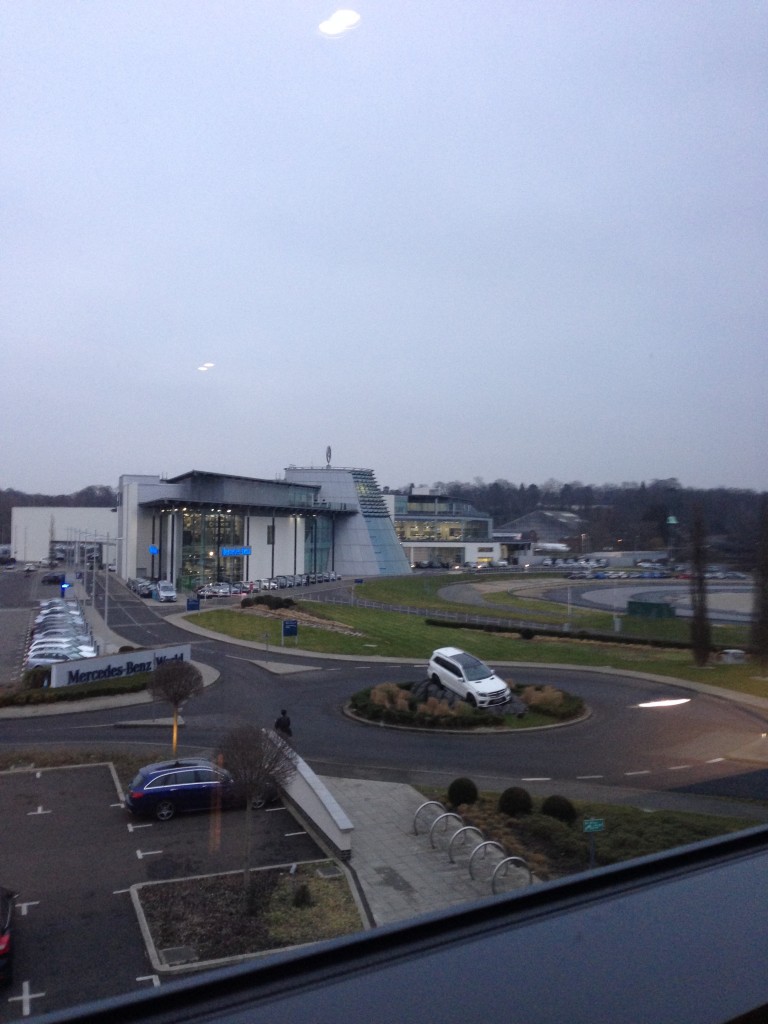 I hope you enjoyed part 1 of The Car Spotter’s Mercedes-Benz World tour. Stay tuned for part 2 which features more cars including some tasty Mercedes AMG black series models and extreme luxury in the shape of the Maybach 62s Landaulet.