Today I will be writing about my recent trip to BMW Welt (World) and the BMW Museum in Munich.

In part 1 I will be sharing my visit to BMW World in Munich, part 2 will include the BMW Museum.

I went to Munich for the closing weekend of Oktoberfest with a group of friends. On the Sunday, 2nd October, some of us decided to give BMW World and BMW Museum a visit, before the drinking began at Oktoberfest later that evening.

Still hungover from the previous day’s visit to the German beer festival, a group of us jumped on the U-Bahn (underground) in the early afternoon and made our way to the BMW attractions near the Olympiapark in Munich.

We were met by two impressive structures, separated by a bridge across the road. The first turned out to be BMW World.

From the outside, the building is a real design-innovation masterpiece. It features a huge double cone glass feature outside that flows into the seamless shape of the enormous glass hall main building. Designed with an 800kW solar plant on the roof, the building really is a spectacle in itself. 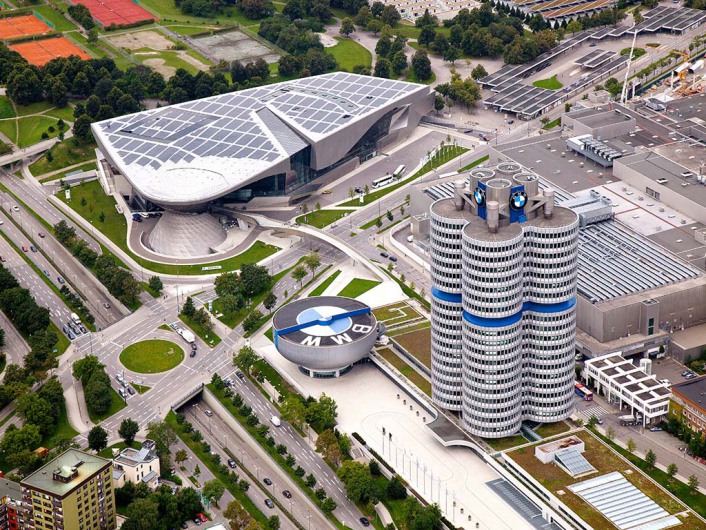 BMW World is the large flat building, BMW Museum is underneath the large BMW Logo across the road

Inside features a large exhibition centre displaying various current vehicles, promotions and brand activity related with BMW cars and motorcycles, Mini and Rolls-Royce. There is a shop selling promotional merchandise, a restaurant and various experiences and events to get involved with.

BMW Welt is free to visit with no admission fees.

Upon walking through the doors, you are met by a large open, spacious atrium with various vehicles and exhibitions displayed around the outside edge of the building. 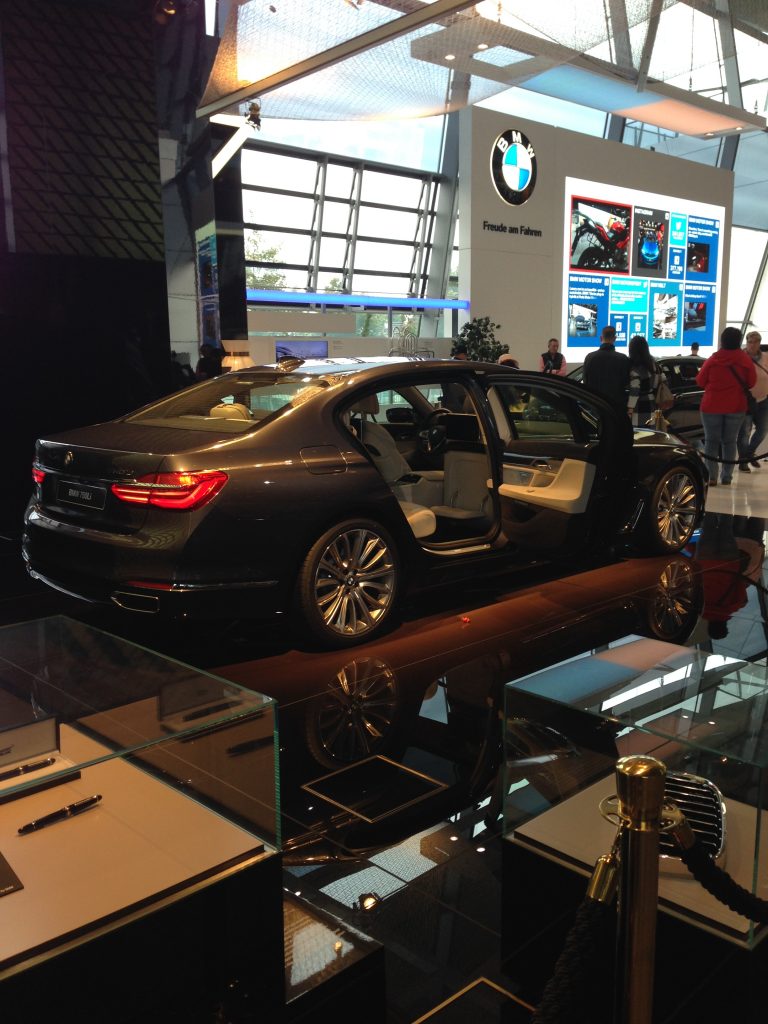 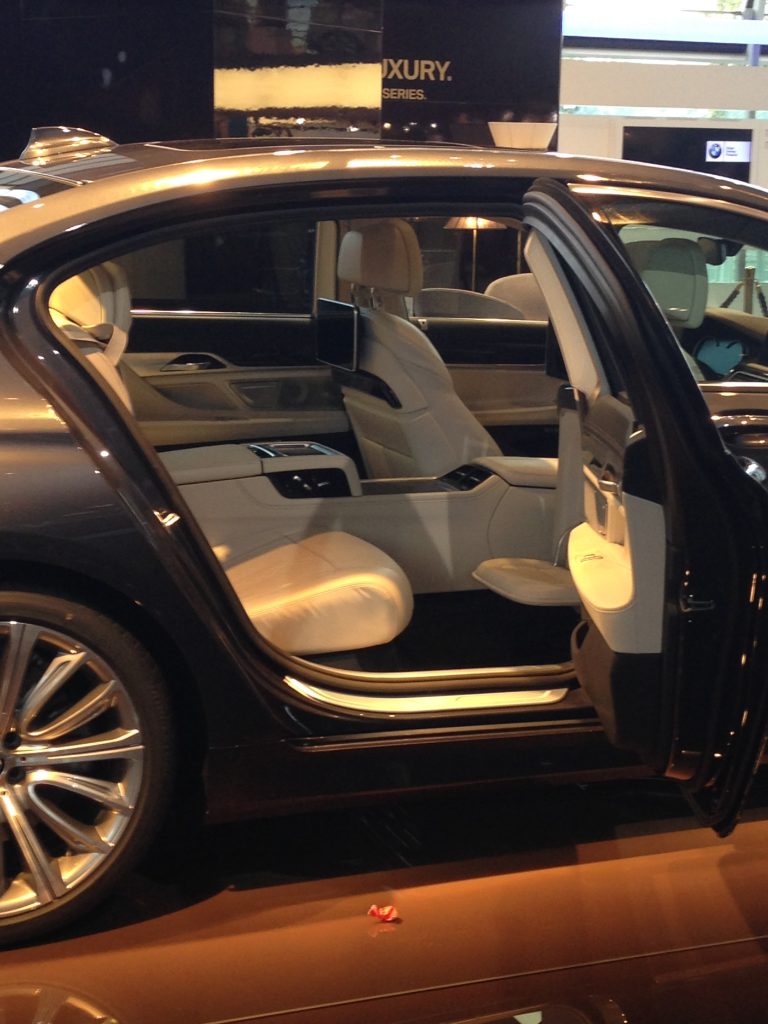 Next was a white BMW i8 supercar, showing the hybrid capabilities BMW has to offer. The i8 is an extremely futuristic looking car in terms of performance, design and innovation. Will we see hybrid vehicles dominate the marketplace in coming years? 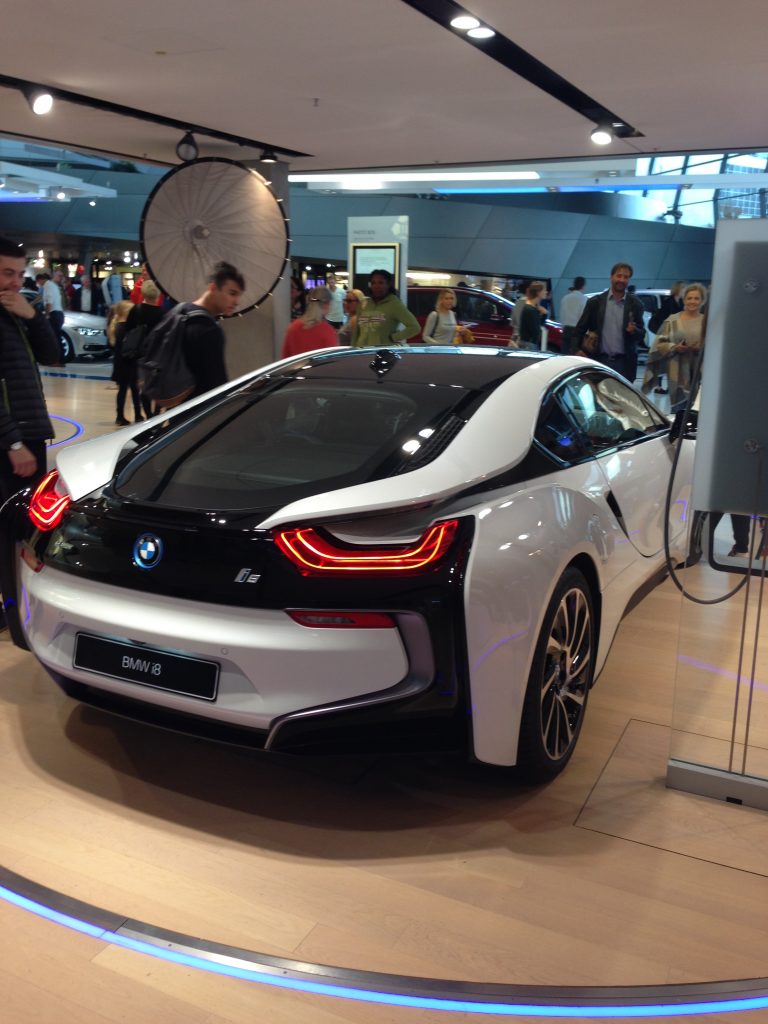 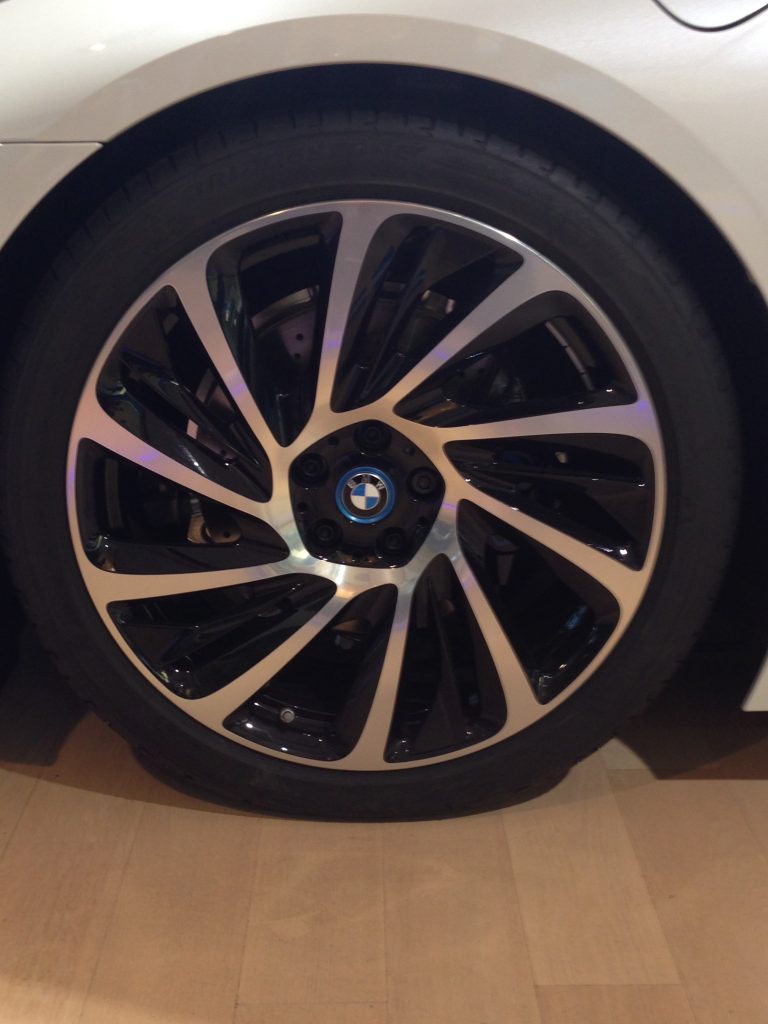 Within the BMW World walls, in addition to BMW cars and motorcycles were a couple of Rolls-Royce and a section of Mini’s. Rolls-Royce became a wholly owned subsidiary of BMW back in 2003, more than 10 years ago.

The black and silver Rolls-Royce Ghost was looking as striking and prestigious as always. 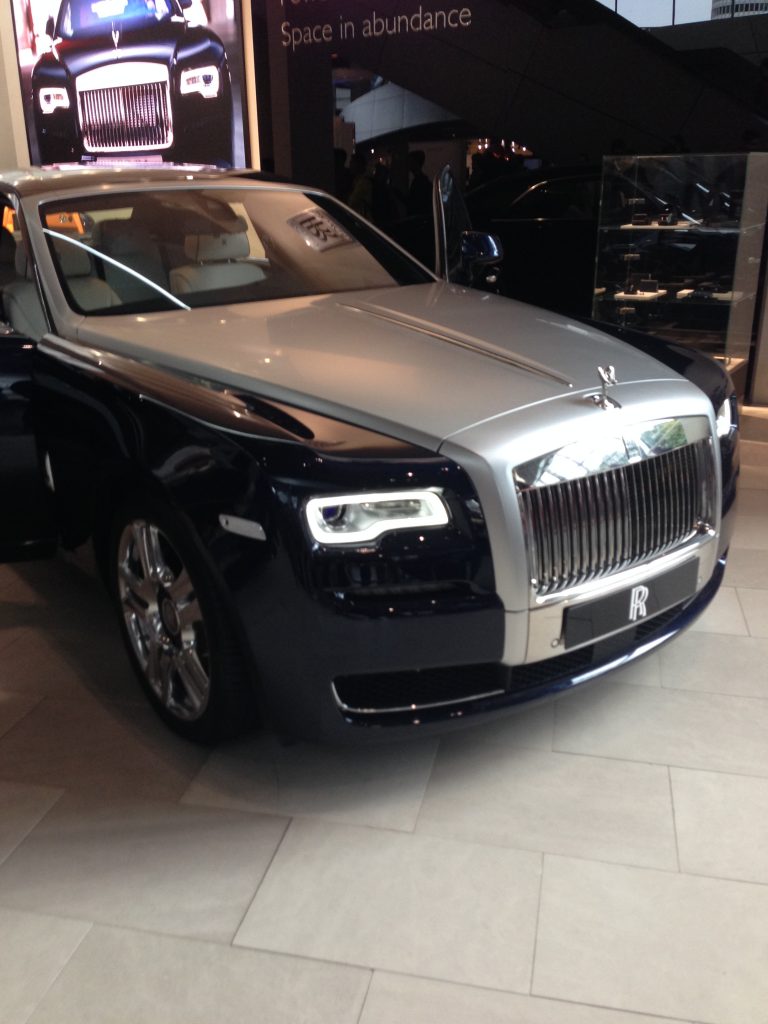 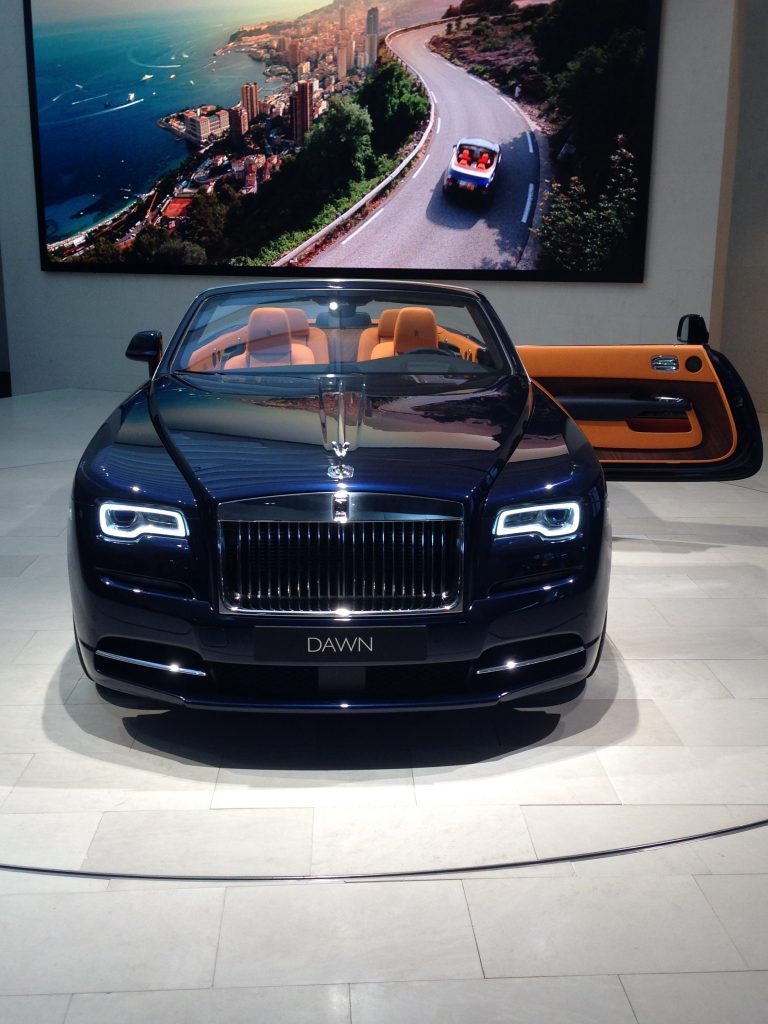 In addition to the Ghost was a Rolls Royce Dawn which is a convertible two door, four seat ultra-luxury vehicle. This particular model featured a bespoke Mandarin orange leather interior and what appeared to be midnight blue paintwork. The vehicle was in front of a projector that had a marketing video on loop. 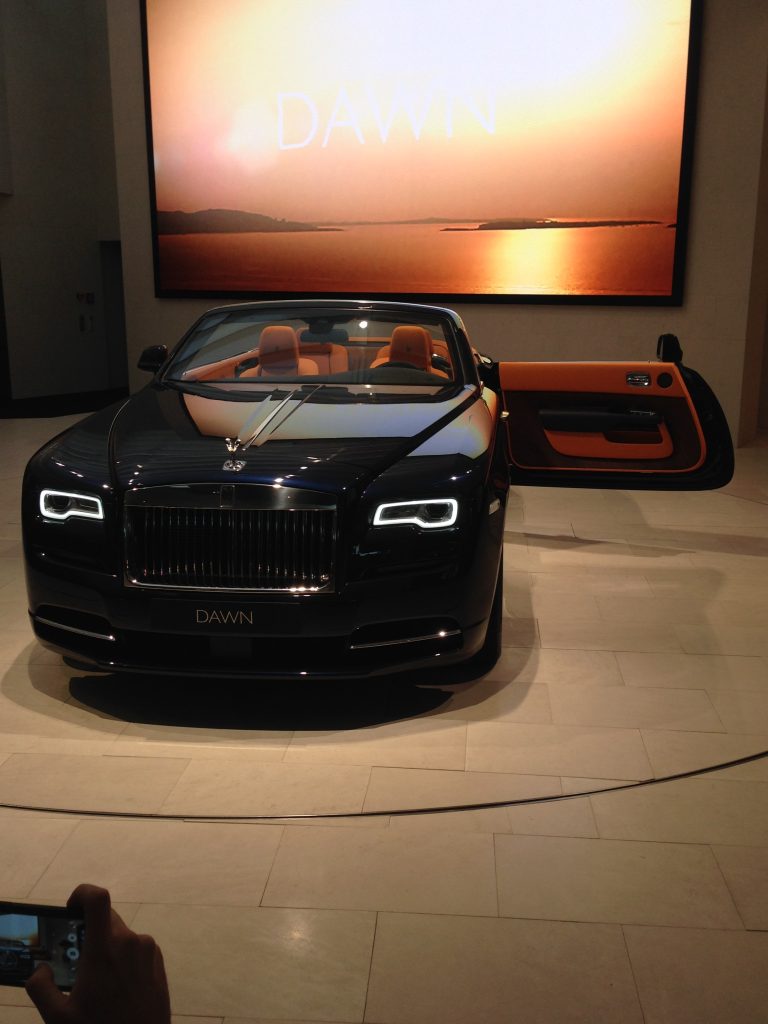 Walking further round the building and I was led to a BMW 6 series 650i convertible in an unusual matte silver finish. Being a fan of matte finishes on car, I was a fan of the colour, but I would still choose matte black or grey if it was my own. 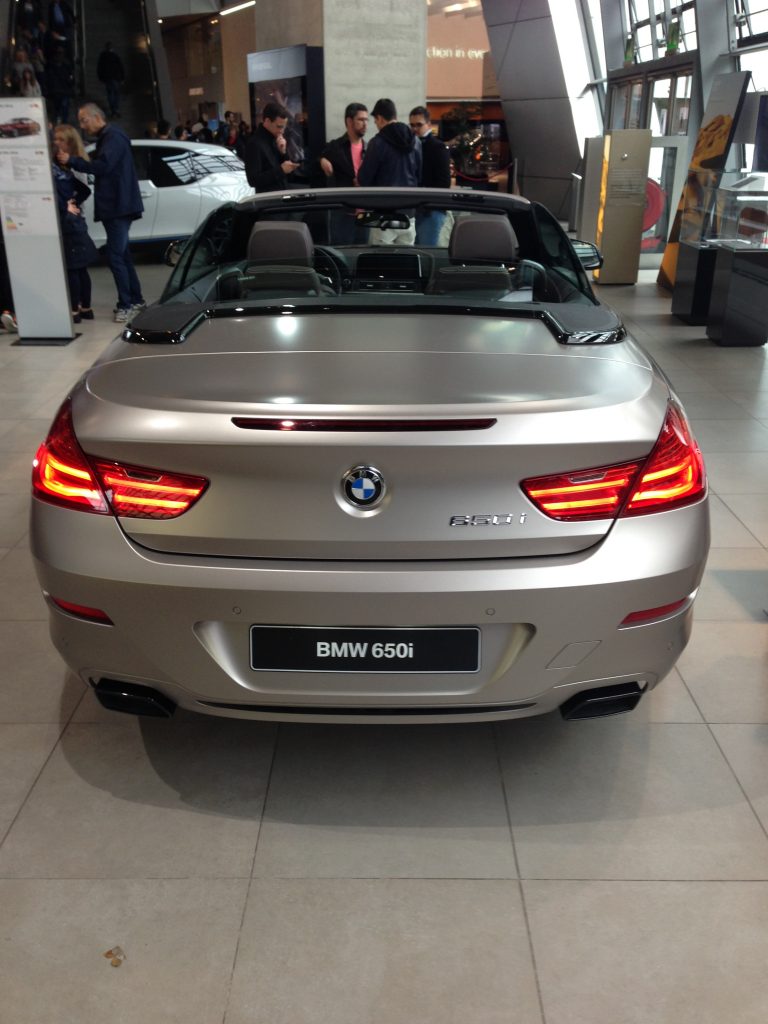 The next section of BMW world was the M section, which housed three BMW M vehicles.

Firstly was a unique BMW M6 coupe in a striking matte orange colour, again I was a fan of the colour. 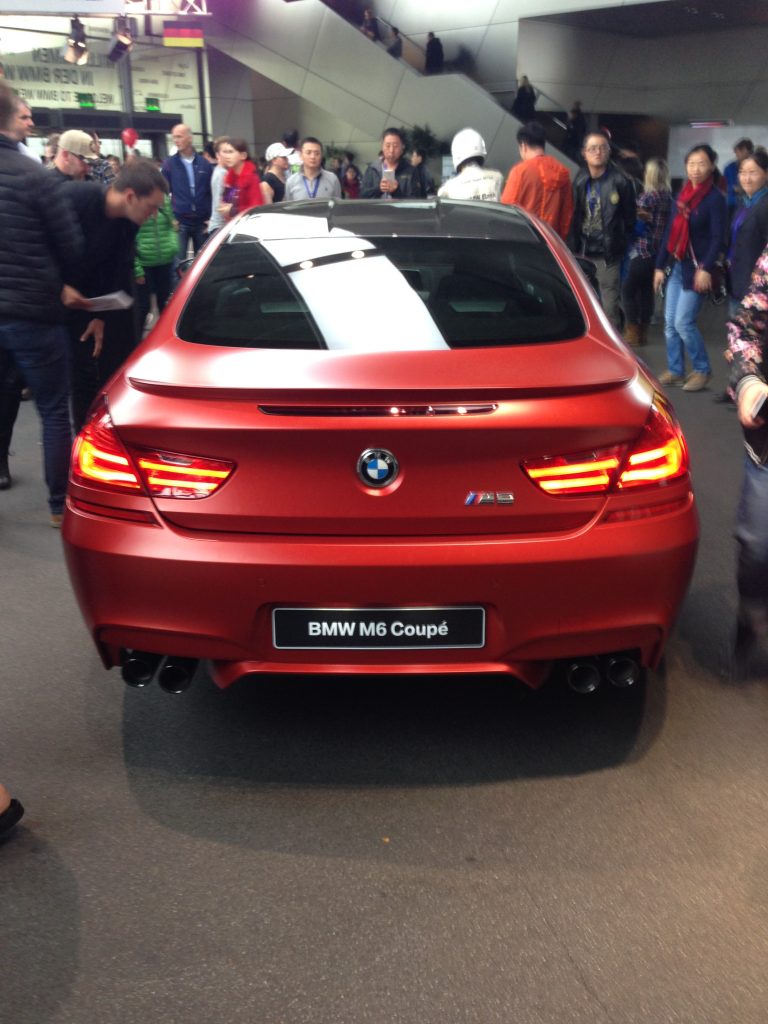 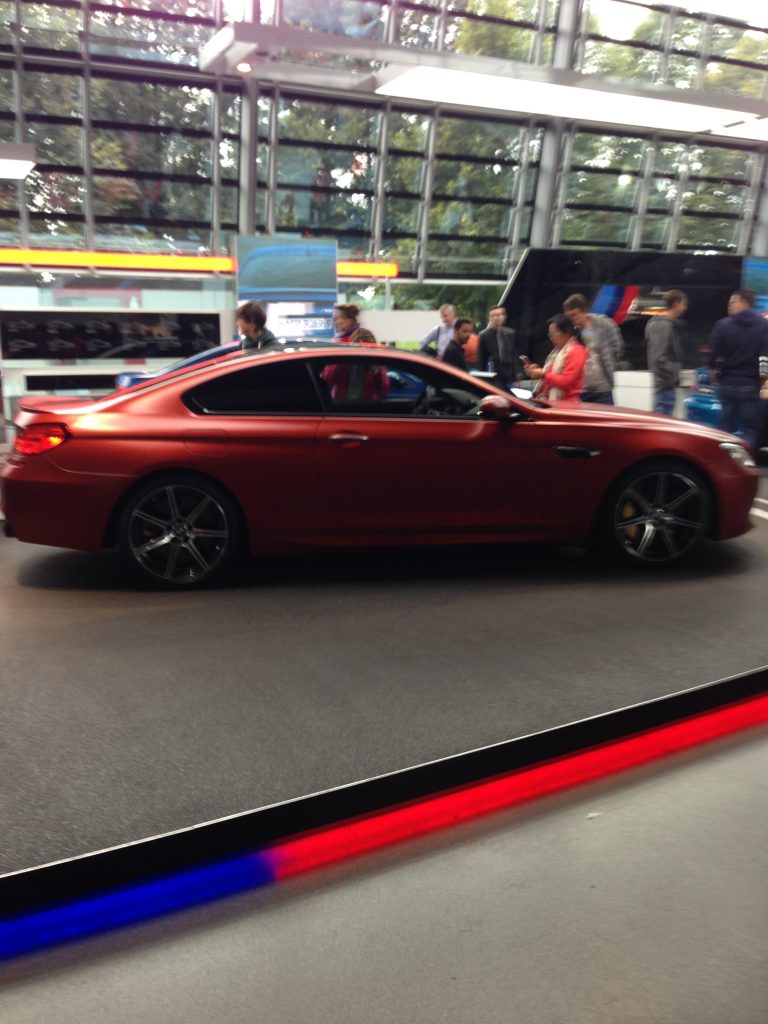 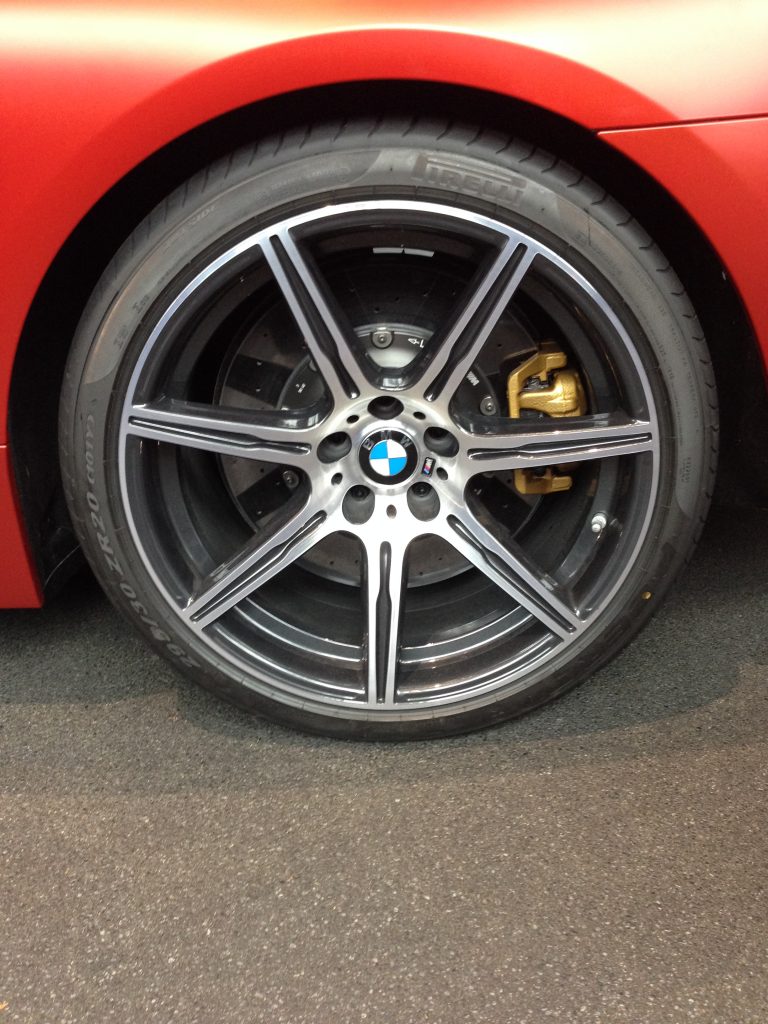 Beside the unique M6 was a dark blue BMW M5 in a dark blue gloss finish. I noticed that the alloy wheels of M5 and M6 alloys were identical and both sported 295/30 ZR20 Pirelli Tyres, both having the brake calipers finished in gold. 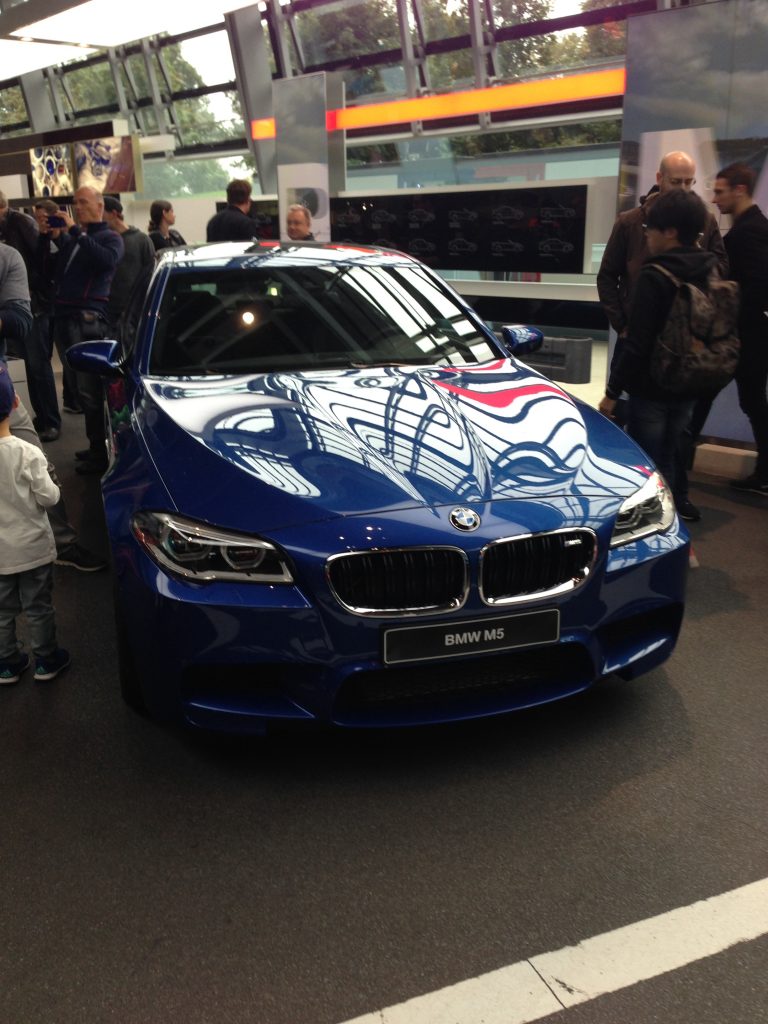 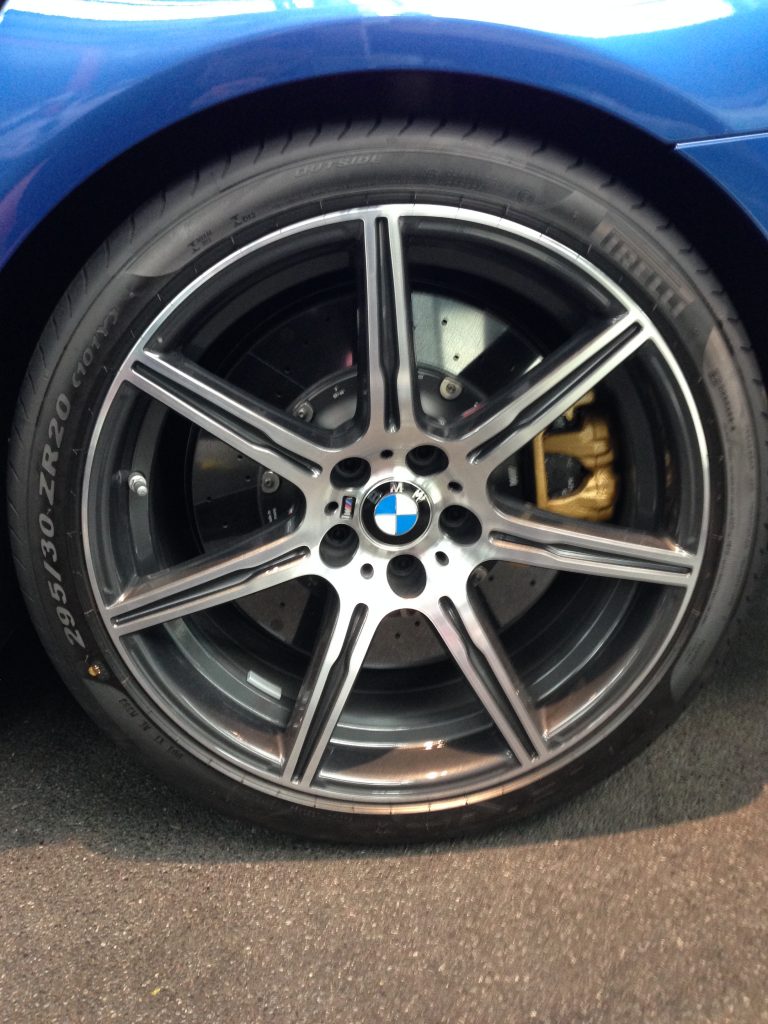 The final M vehicle in the section was the more recently introduced BMW M2 in a lighter blue finish and featuring a completely different design of alloys to the M5 and M6. All three vehicles had huge disc brakes and the M2 is no exception with the brake calipers being painted blue in this case to match the exterior of the BMW. 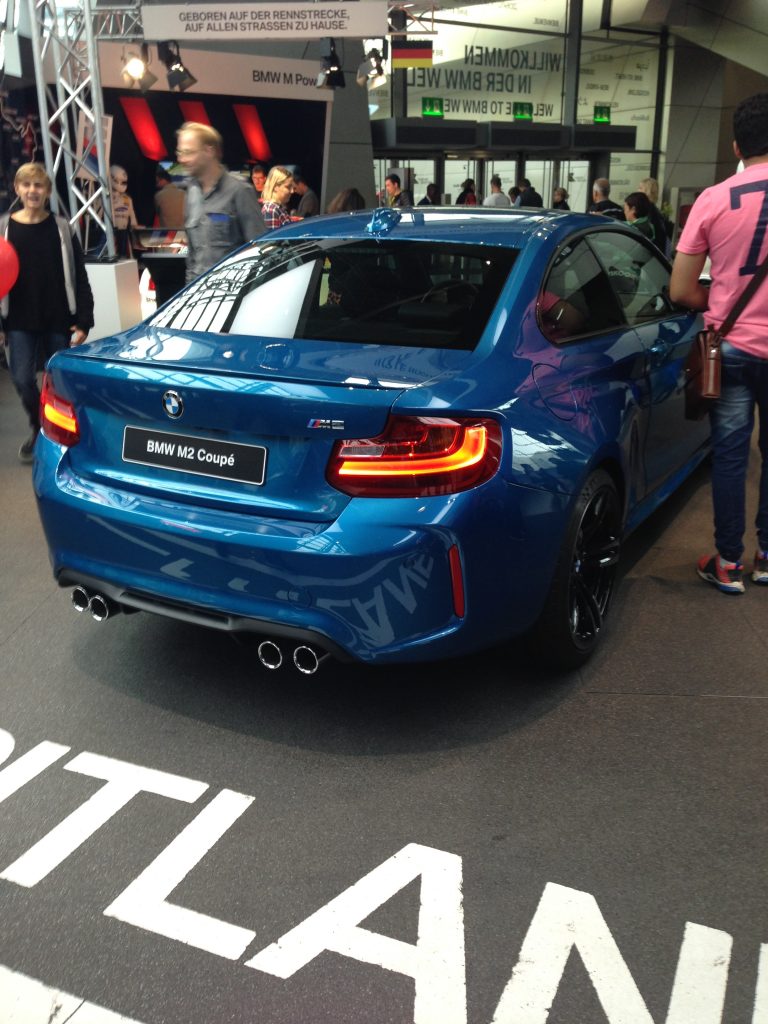 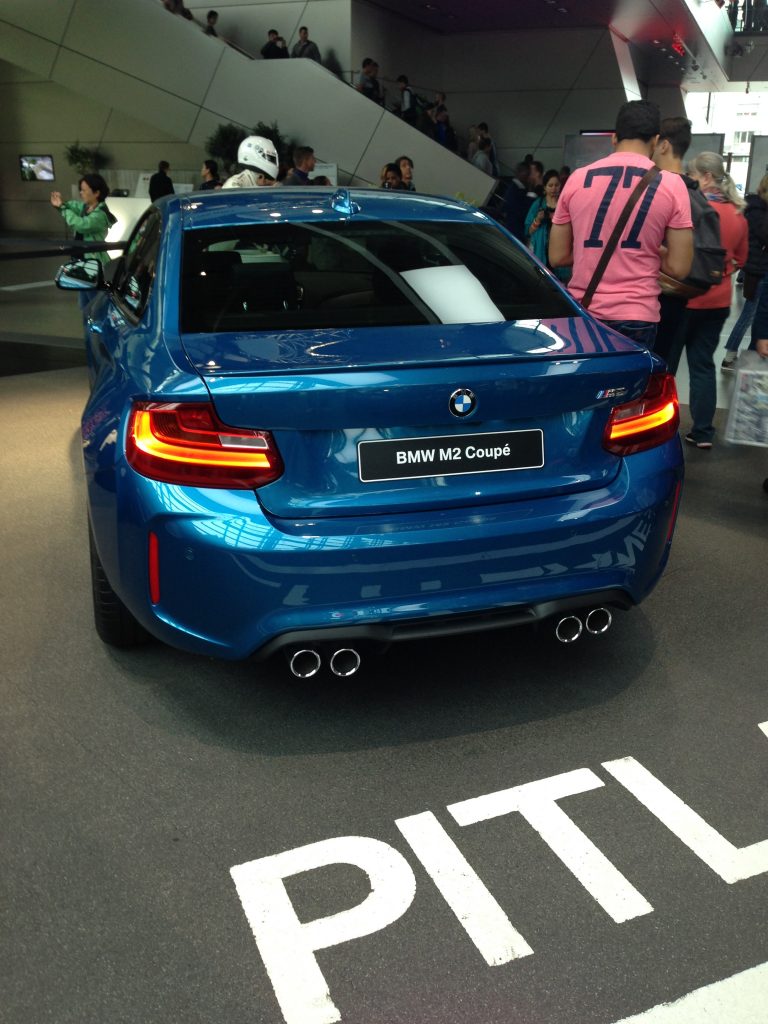 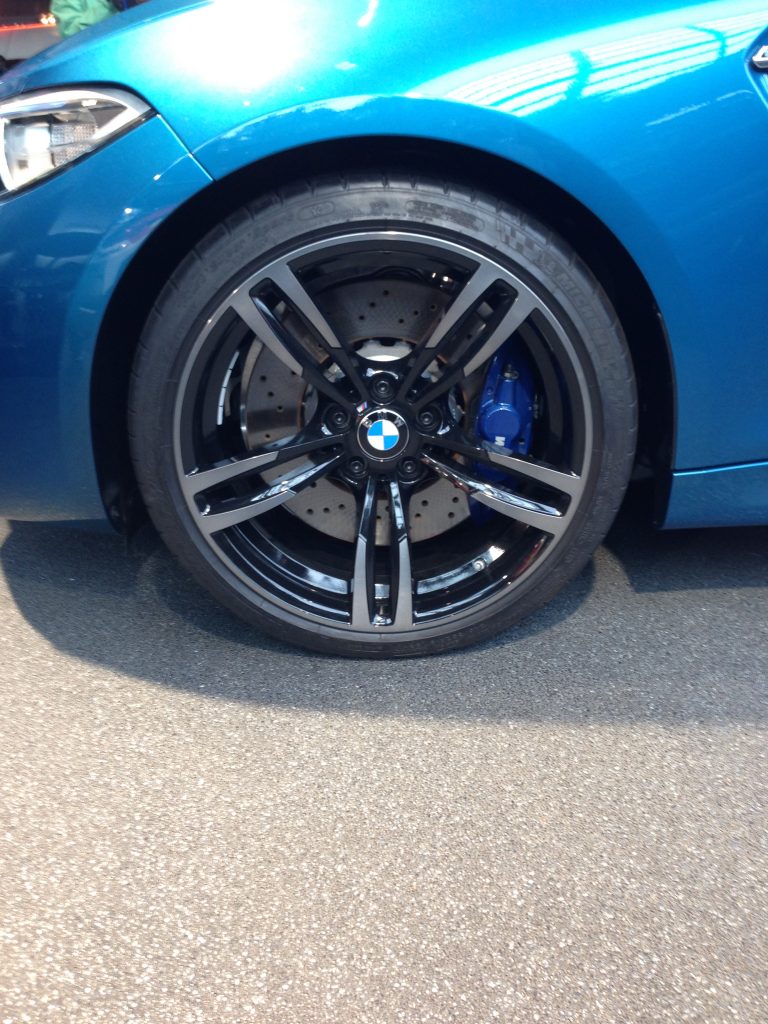 Once we had seen all BMW World had to offer, we left the building from the entrance we came in at and crossed over the bridge to the BMW museum.

Part 2 of the blog that features the BMW museum will be up soon. Stay tuned to see BMW’s from all era’s, the evolution of the 3 series, BMW motorcycles, supercars, prototypes and much more.

Have you been to BMW World or Museum in Munich? What were your favourite BMW’s on display?