Today I, The Car Spotter, will be sharing with you part 2 of my recent tour around Mercedes-Benz World. To view part 1, please click here.

Today, on the second day of my two day tour, I was able to view the Mercedes exhibits at my own pace and didn’t have a guide to give me further information on each of the cars.

I drove onto the staff car park again, this time it was approximately 8am in the morning and there were only a couple of Mercedes here. The one that stood out was parked on the row in front of me, a lovely grey C63 AMG coupe. 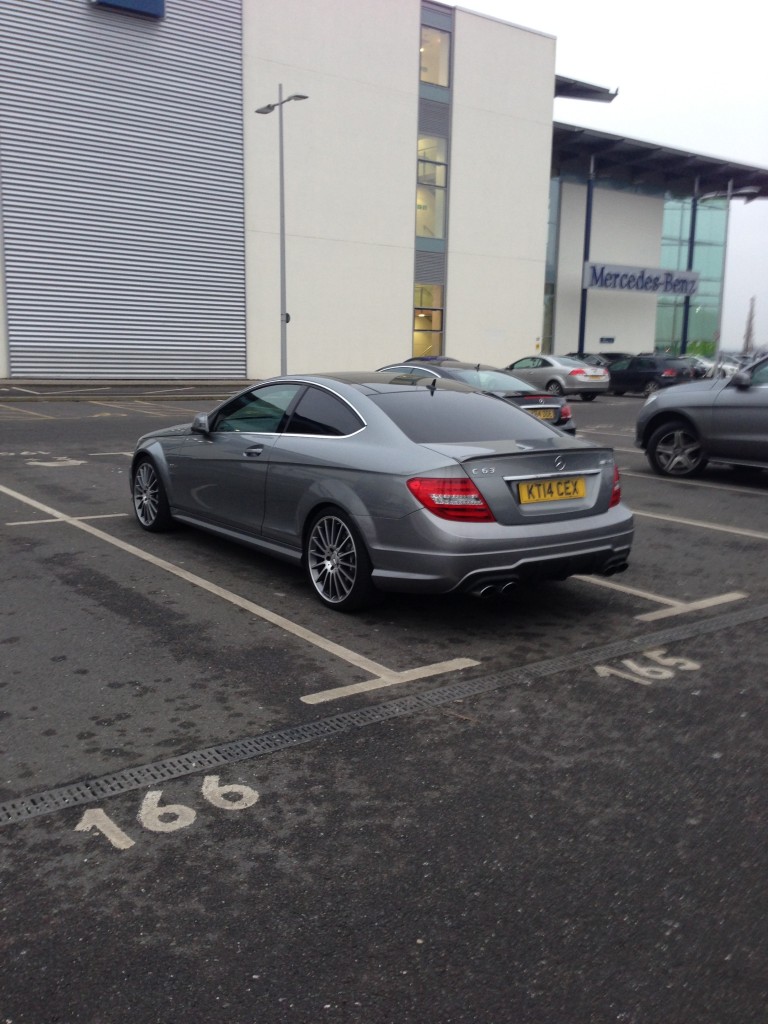 After walking a few steps closer to the entrance of Mercedes-Benz World, I was greeted again by a white A45 AMG on a raised platform. The AMG hatchback featured black multi-spoke alloys and red brake calipers. 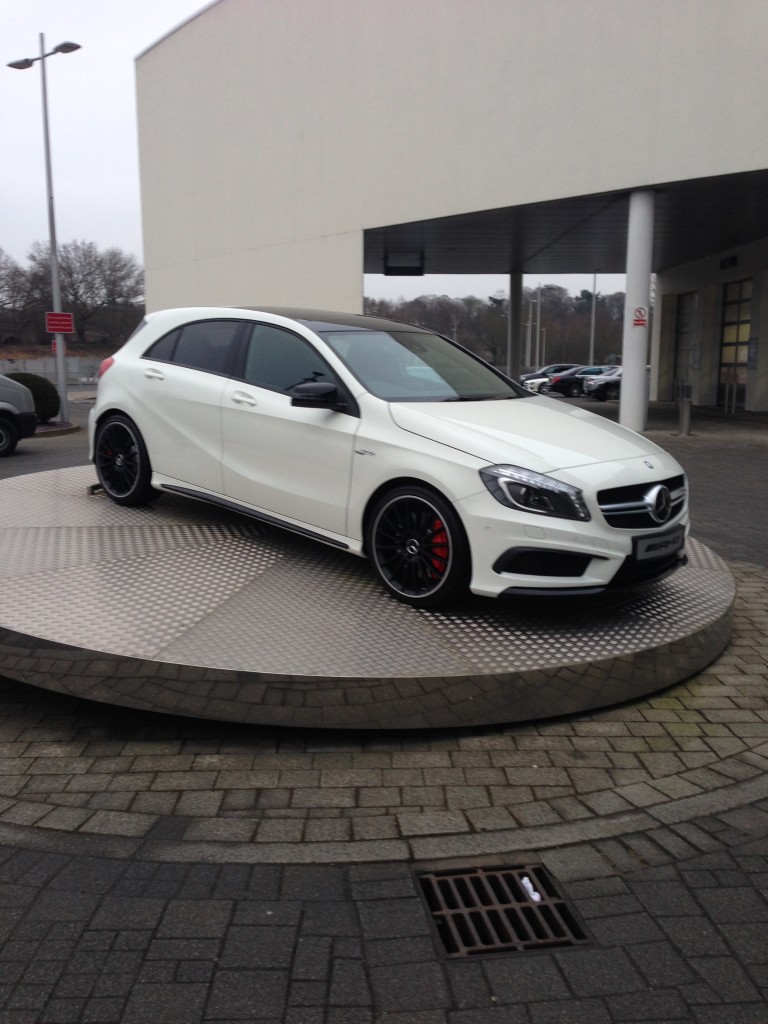 I ventured onto the first floor, looking at the latest C-Class and E-Class variants, saloons, coupes and estates however it was a pair of cars at the far side of the building that had caught my attention the day before. One of the cars I had never before seen in person, making the occasion even more exciting for myself.

The two cars in question were a matte black C63 AMG coupe black series and a white SLS 63 AMG Black Series. Two brutal, hardcore Mercedes-Benz monsters. It was the latter, the SLS 63 Black Series which I had previously not seen. 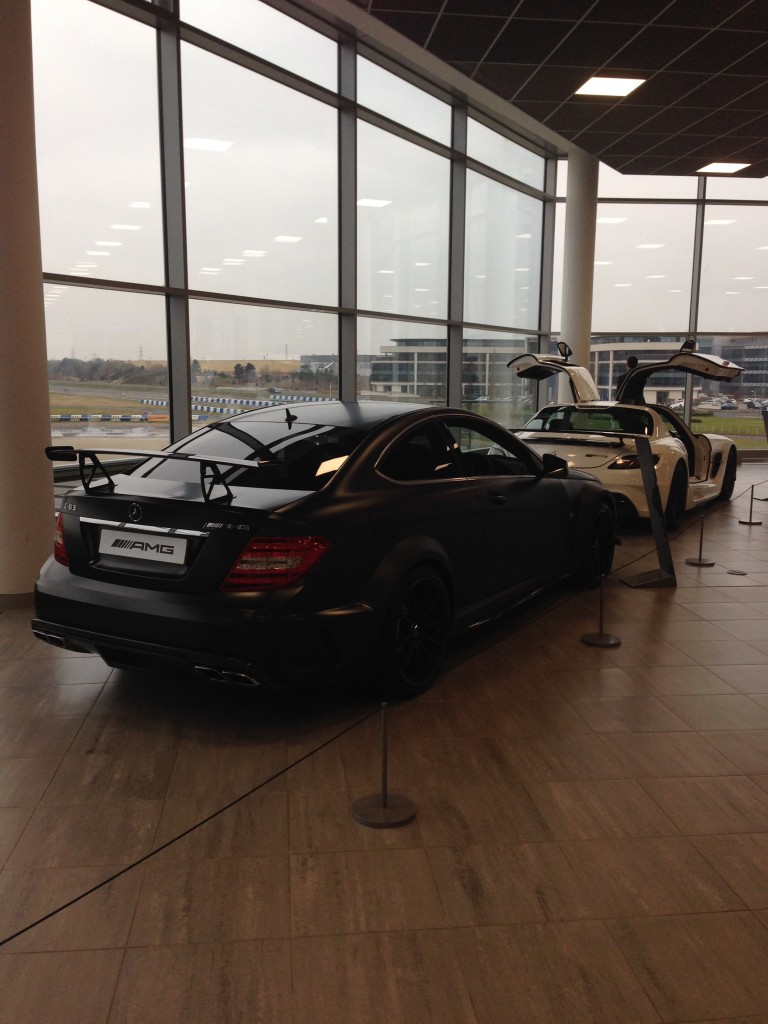 The bonnet vents that only feature on the 507 edition C63 AMG’s and Black Series added to the overall look of the car. The body kit is widened, carbon fibre aerodynamic parts added including canards and rear seats removed to save weight. The 6.2L V8 engine produces 510hp, 59 more than the standard C63. The car revs up to 7200rpm, up 400 from the standard C63 and torque is up from 443lb-ft to 457lb-ft. Price is around £100,000. 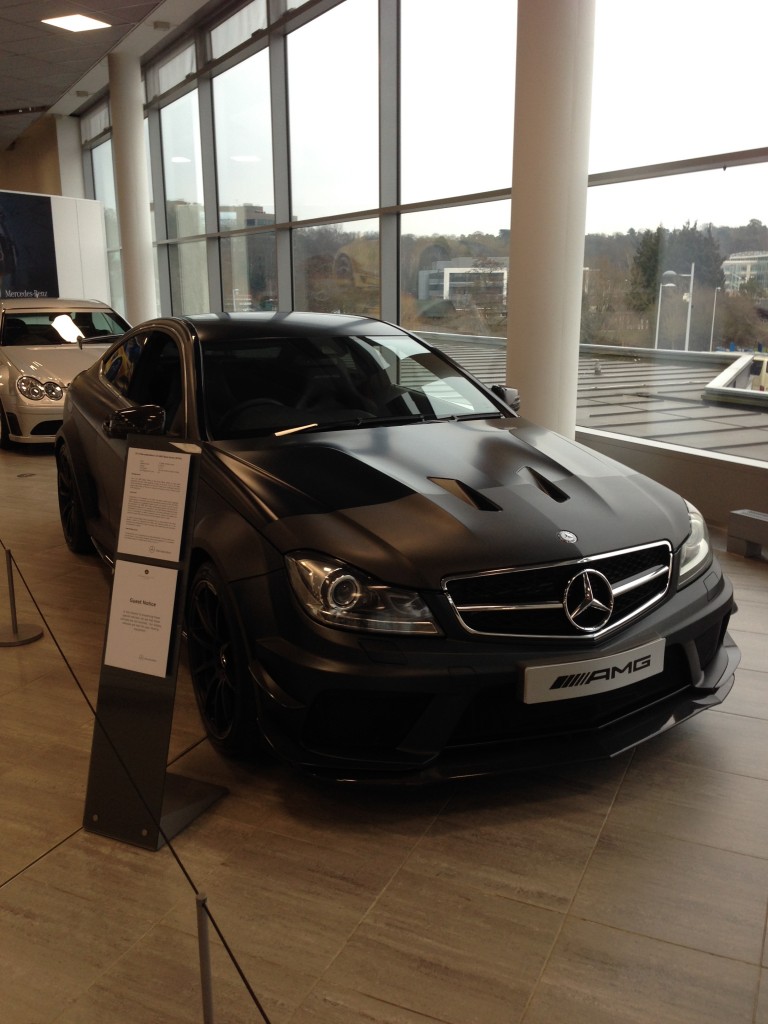 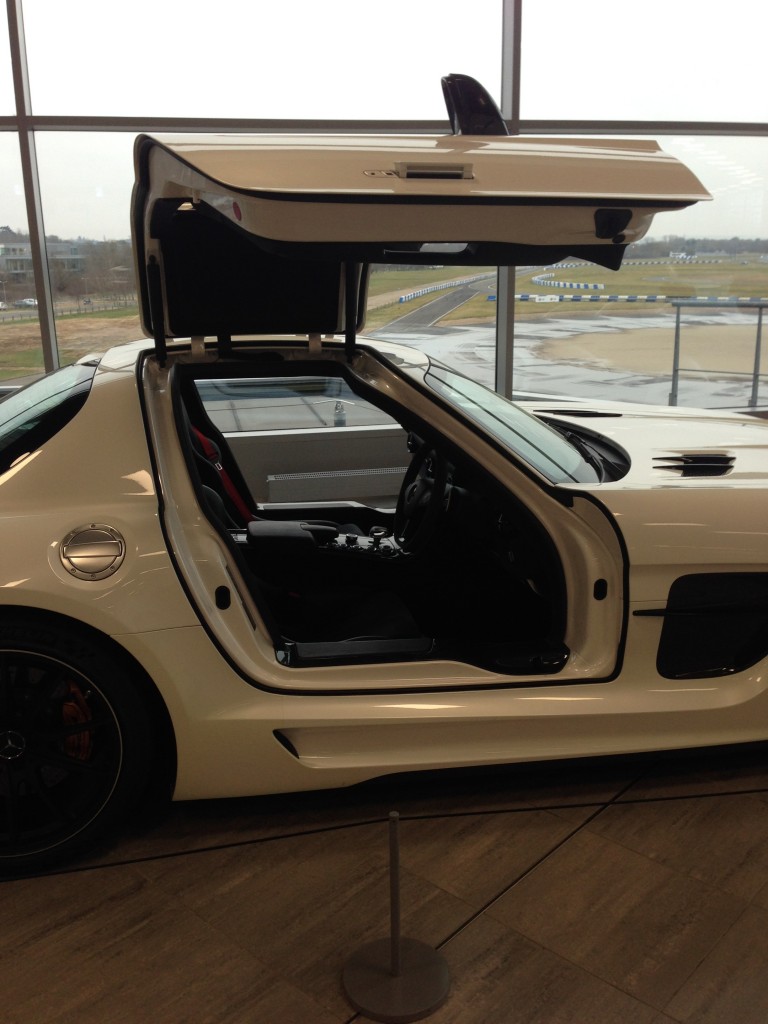 Gullwings up on the SLS Black Series 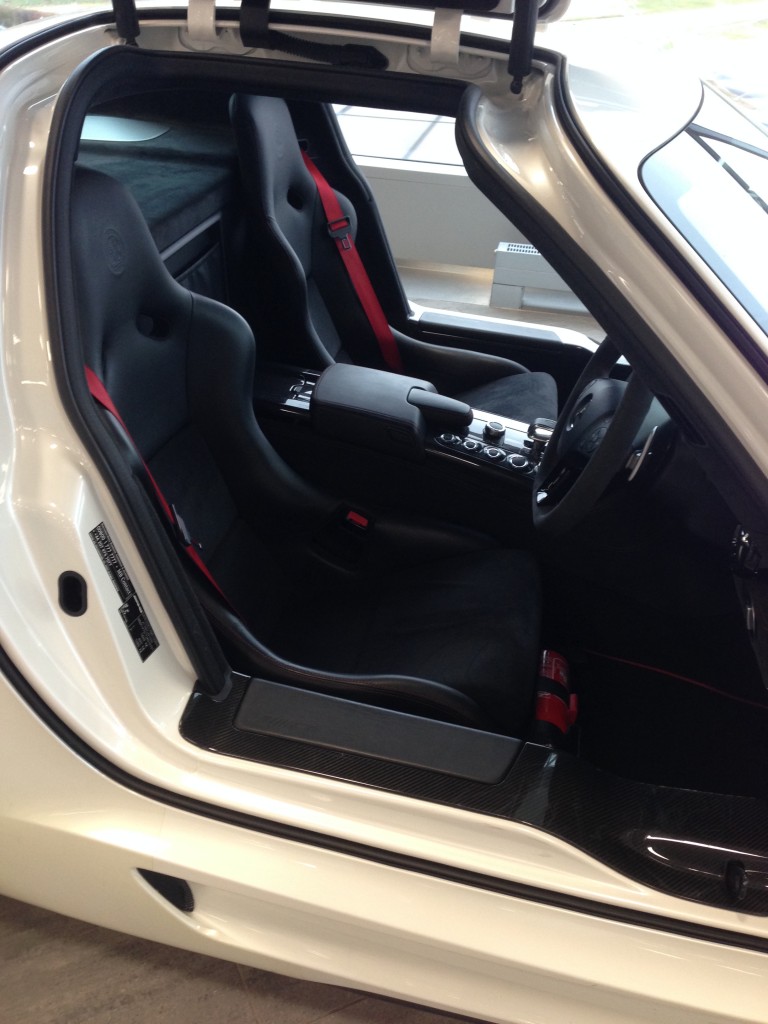 Interior of the SLS Black Series 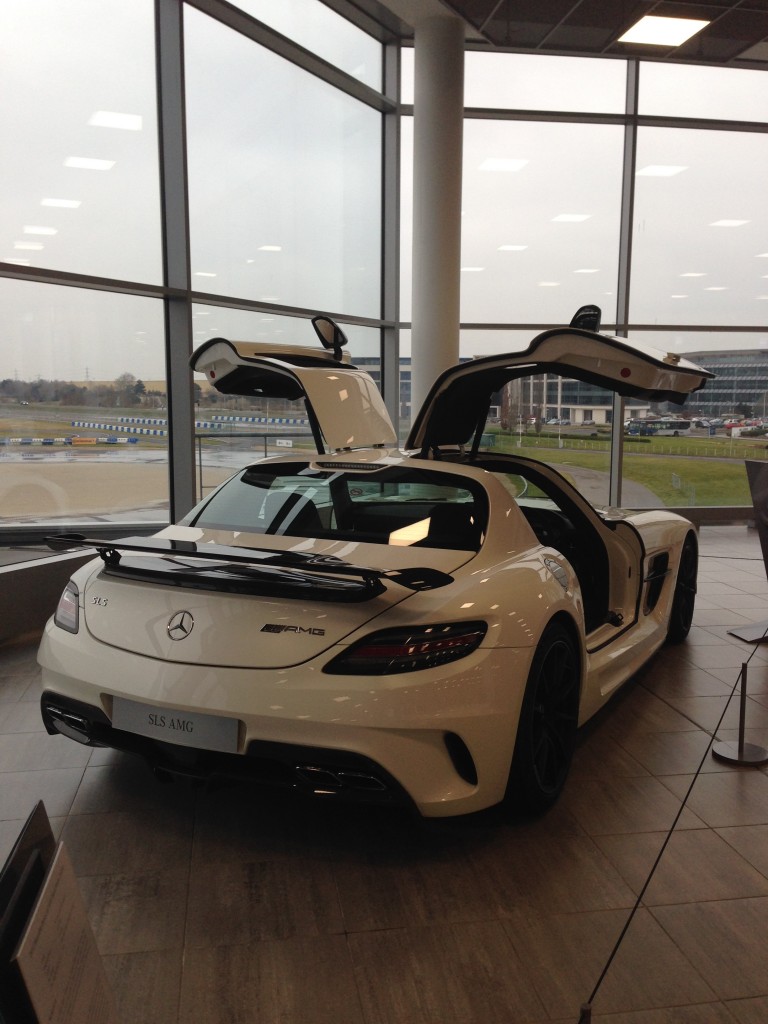 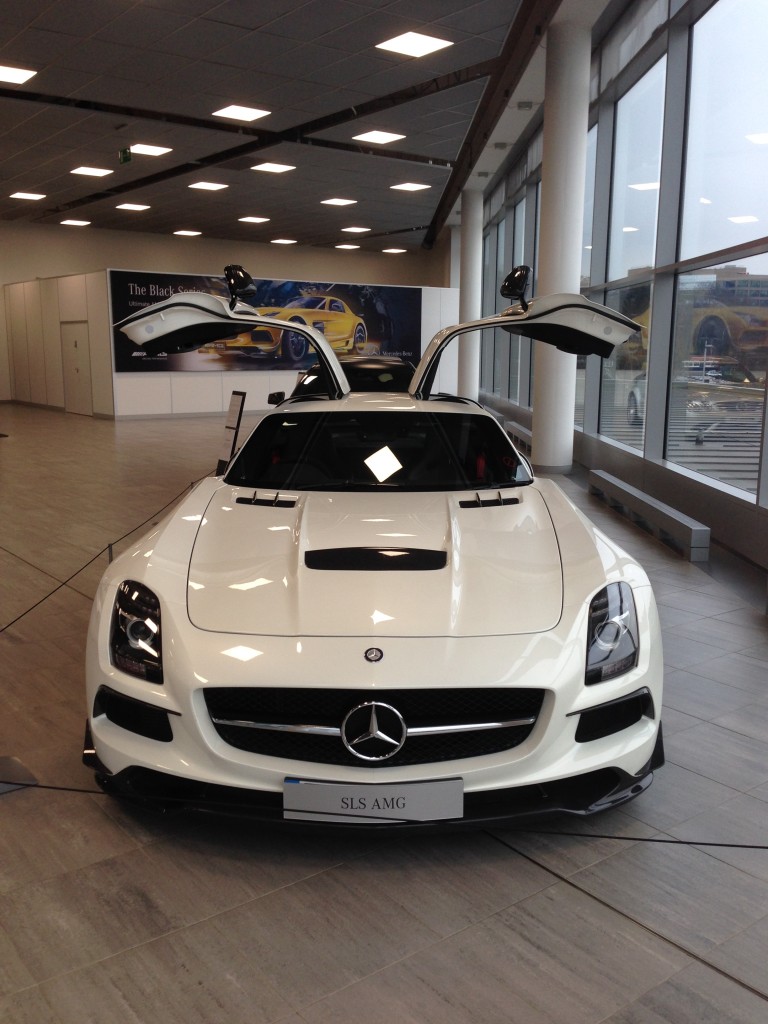 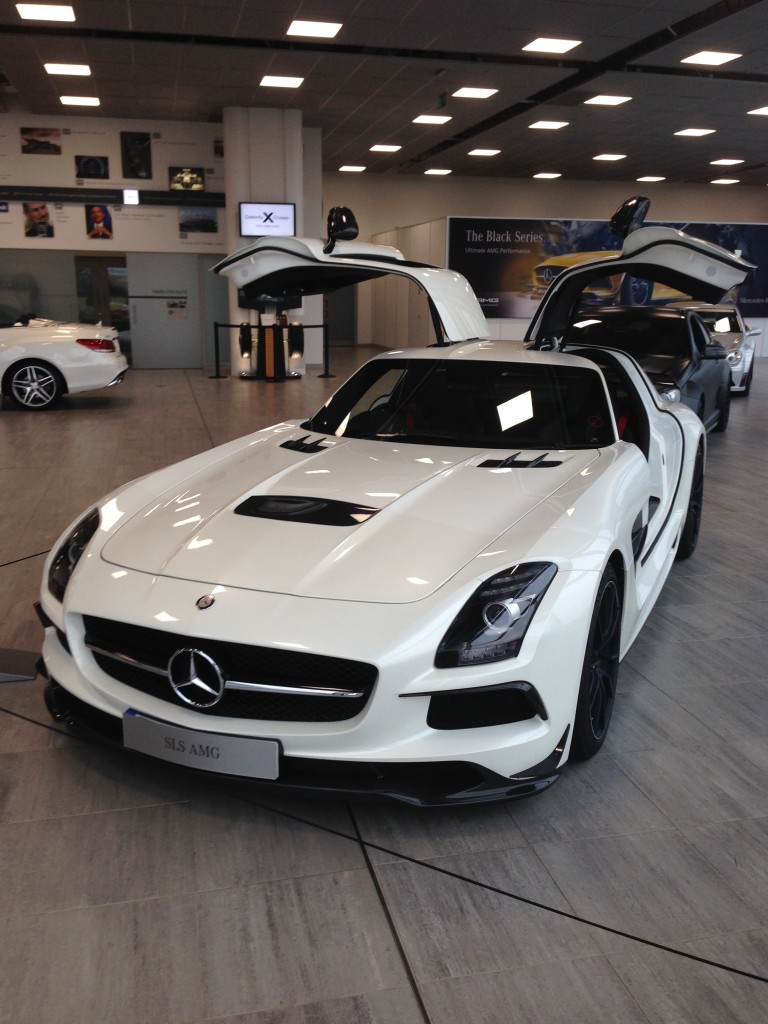 Another front quarter view of the SLS Black Series 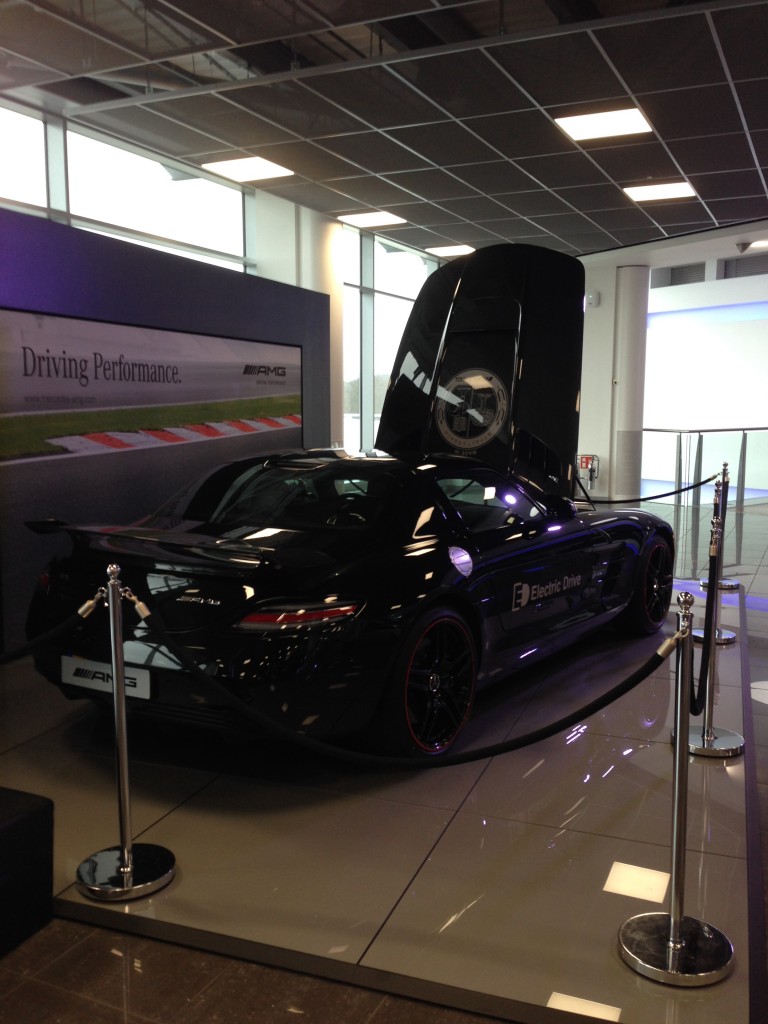 Upon heading downstairs near to the entrance/exit, I was able to inspect a Maybach 62s Landaulet. Maybach’s are pretty rare sights to begin with however this one was a limited production model. The Maybach 62s Landaulet is based on the Maybach 62Sm sharing the same 612bhp biturbo V12 engine. The front seats are completely enclosed and sepearte from the rear passenger compartment by a power divider window. Like the Mercedes F 200, the opacity can be changed electronically, at the flick of a button changed from transparent to opaque.

A sliding soft roof gives back seat passengers an open view, the chauffeur’s front seats are finished in black leather whilst the rear passenger section is white with piano black and gold-flecked black granite inserts. Inside the rear passenger enclosure, the Maybach 62 s Landaulet features screens that show the view of the road ahead projected by cameras to prevent travel sickness.

The vast legroom of the Maybach 62s Landaulet is incomparable with anything I have ever witnessed before. Like most Limousine style cars, the rear seats are placed behind the rear pillar for maximum privacy. The car is eastimated to have a worth of over £1 million. The car would be suitable for a power hungry dictator, overall the car seemed a bit over the top for my taste but it would definitely provide a comfortable and private form of travel. 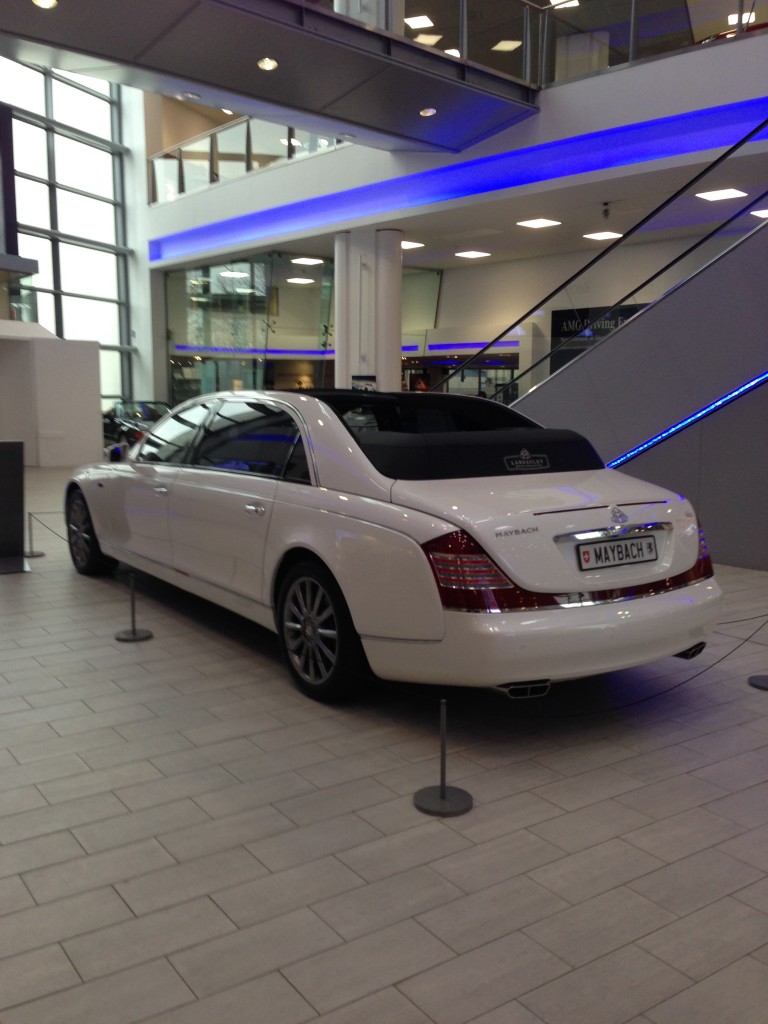 This was the last vehicle for me to see before my fantastic tour was complete.

I hope you enjoyed part 2 of The Car Spotter’s Mercedes-Benz World tour.